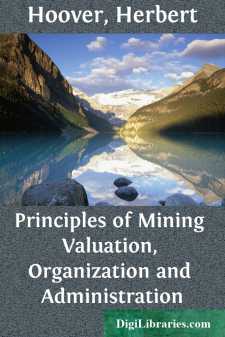 The following discussion is limited to in situ deposits of copper, gold, lead, silver, tin, and zinc. The valuation of alluvial deposits, iron, coal, and other mines is each a special science to itself and cannot be adequately discussed in common with the type of deposits mentioned above.

The value of a metal mine of the order under discussion depends upon:—

The profit that may be won from ore exposed; The prospective profit to be derived from extension of the ore beyond exposures; The effect of a higher or lower price of metal (except in gold mines); The efficiency of the management during realization.

The first may be termed the positive value, and can be approximately determined by sampling or test-treatment runs. The second and the third may be termed the speculative values, and are largely a matter of judgment based on geological evidence and the industrial outlook. The fourth is a question of development, equipment, and engineering method adapted to the prospects of the enterprise, together with capable executive control of these works.

Page 2 It should be stated at the outset that it is utterly impossible to accurately value any mine, owing to the many speculative factors involved. The best that can be done is to state that the value lies between certain limits, and that various stages above the minimum given represent various degrees of risk. Further, it would be but stating truisms to those engaged in valuing mines to repeat that, because of the limited life of every mine, valuation of such investments cannot be based upon the principle of simple interest; nor that any investment is justified without a consideration of the management to ensue. Yet the ignorance of these essentials is so prevalent among the public that they warrant repetition on every available occasion.

To such an extent is the realization of profits indicated from the other factors dependent upon the subsequent management of the enterprise that the author considers a review of underground engineering and administration from an economic point of view an essential to any essay upon the subject. While the metallurgical treatment of ores is an essential factor in mine economics, it is considered that a detailed discussion of the myriad of processes under hypothetic conditions would lead too far afield. Therefore the discussion is largely limited to underground and administrative matters.

The valuation of mines arises not only from their change of ownership, but from the necessity in sound administration for a knowledge of some of the fundamentals of valuation, such as ore reserves and average values, that managerial and financial policy may be guided aright. Also with the growth of corporate ownership there is a demand from owners and stockholders for periodic information as to the intrinsic condition of their properties....