Prince Ricardo of Pantouflia being the adventures of Prince Prigio's son 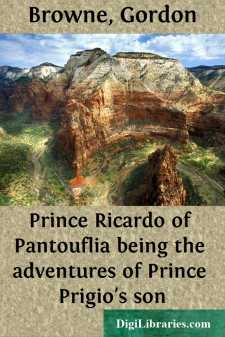 “I’m sure I don’t know what to do with that boy!” said King Prigio of Pantouflia.

“If you don’t know, my dear,” said Queen Rosalind, his illustrious consort, “I can’t see what is to be done.  You are so clever.”

The king and queen were sitting in the royal library, of which the shelves were full of the most delightful fairy books in all languages, all equally familiar to King Prigio.  The queen could not read most of them herself, but the king used to read them aloud to her.  A good many years had passed—seventeen, in fact—since Queen Rosalind was married, but you would not think it to look at her.  Her grey eyes were as kind and soft and beautiful, her dark hair as dark, and her pretty colour as like a white rose blushing, as on the day when she was a bride.  And she was as fond of the king as when he was only Prince Prigio, and he was as fond of her as on the night when he first met her at the ball.

He meant his son, Prince Ricardo, but he called him Dick in private.

“I believe it’s the fault of his education,” his Majesty went on.  “We have not brought him up rightly.  These fairy books are at the bottom of his provoking behaviour,” and he glanced round the shelves.  “Now, when I was a boy, my dear mother tried to prevent me from reading fairy books, because she did not believe in fairies.”

“But she was wrong, you know,” said the queen.  “Why, if it had not been for all these fairy presents, the Cap of Darkness and all the rest of them, you never could have killed the Fire-beast and the Ice-beast, and—you never could have married me,” the queen added, in a happy whisper, blushing beautifully, for that was a foolish habit of hers.

“It is quite true,” said the king, “and therefore I thought it best to bring Dick up on fairy books, that he might know what is right, and have no nonsense about him.  But perhaps the thing has been overdone; at all events, it is not a success.  I wonder if fathers and sons will ever understand each other, and get on well together?  There was my poor father, King Grognio, he wanted me to take to adventures, like other princes, fighting Firedrakes, and so forth; and I did not care for it, till you set me on,” and he looked very kindly at her Majesty.  “And now, here’s Dick,” the monarch continued, “I can’t hold him back.  He is always after a giant, or a dragon, or a magician, as the case may be; he will certainly be ploughed for his examination at College.  Never opens a book.  What does he care, off after every adventure he can hear about?  An idle, restless youth!  Ah, my poor country, when I am gone, what may not be your misfortunes under Ricardo!”

Here his Majesty sighed, and seemed plunged in thought.

“But you are not going yet, my dear,” said the queen.  “Why you are not forty!  And young people will be young people.  You were quite proud when poor Dick came home with his first brace of gigantic fierce birds, killed off his own sword, and with such a pretty princess he had rescued—dear Jaqueline?  I’m sure she is like a daughter to me.  I cannot do without her.”

“I wish she were a daughter-in-law; I wish Dick would take a fancy to marry her,” said the king.  “A nicer girl I never saw.”

“And so accomplished,” added Queen Rosalind.  “That girl can turn herself into anything—a mouse, a fly, a lion, a wheelbarrow, a church!  I never knew such talent for magic.  Of course she had the best of teachers, the Fairy Paribanou herself; but very few girls, in our time, devote so many hours to practice as dear Jaqueline.  Even now, when she is out of the schoolroom, she still practises her scales.  I saw her turning little Dollie into a fish and back again in the bath-room last night.  The child was delighted.”

In these times, you must know, princesses learned magic, just as they learn the piano nowadays; but they had their music lessons too, dancing, calisthenics, and the use of the globes....