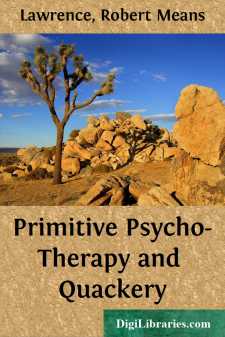 Among the various subjects which belong to the province of medical folk-lore, one of the most interesting relates to amulets and protective charms, which represent an important stage in the gradual development of Medicine as a science. And especially noteworthy among medical amulets are those inscribed with mystic sentences, words, or characters, for by their examination and study we may acquire some definite knowledge of the mental condition of the people who made use of them.

Satisfactorily to explain the derivation of the English word "amulet" has taxed the ingenuity of etymologists, and its origin is admittedly obscure. According to some authorities, the Latin amuletum was derived from amoliri, to avert or repel; but the greater weight of evidence points to the Arabic verb hamala, meaning "to carry." The definitions usually given embody both of these ideas; for amulets, in the ancient medical conception of the term, were any objects, ornamental or otherwise, worn on the bodies of men or animals, and believed to neutralize the ill effects of noxious drugs, incantations, witchcrafts, and all morbific agencies whatever. To the Oriental mind amulets symbolize the bond between a protective power and dependent mundane creatures; they are prophylactics against the forces of evil, and may be properly characterized as objects superstitiously worn, whose alleged magical potency is derived from the faith and imagination of the wearer.

The use of amulets has been attributed to religious sentimentality or religiosity. The latter word has been defined as "an excessive susceptibility to the religious sentiments, especially wonder, awe, and reverence, unaccompanied by any correspondent loyalty to divine law in daily life."

Any one desirous of moralizing on the subject may find a theme presenting aspects both sad and comical. When, however, one reflects that amulets, in some one of their protean forms, have been invested with supernatural preventive and healing powers by the people of all lands and epochs, and that they have been worn not only by kings and princes, but by philosophers, prelates, and physicians of eminence as well, it is evident that the subject deserves more than a passing consideration.

It would be vain to seek the origin of their employment, which lies hidden behind the misty veil of remote antiquity. The eastern nations of old, as is well known, were much addicted to the use of amulets; and from Chaldea, Egypt, and Persia the practice was transmitted westward, and was thus extended throughout the civilized world. Among the great number of popular amulets in ancient times, many were fashioned out of metals, ivory, stone, and wood, to represent deities, animals, birds, and fishes; others were precious stones or cylinders inscribed with hieroglyphics; necklaces of shell or coral, crescent- or hand-shaped charms, and grotesque images. Their virtues were derived either from the material, from the shape, or from the magic rites performed at the time of their preparation....