Prime Ministers and Some Others A Book of Reminiscences 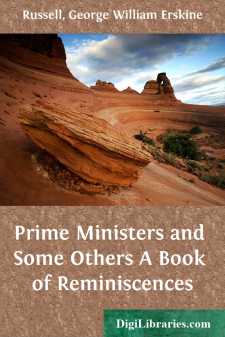 I remember ten Prime Ministers, and I know an eleventh. Some have passed beyond earshot of our criticism; but some remain, pale and ineffectual ghosts of former greatness, yet still touched by that human infirmity which prefers praise to blame. It will behove me to walk warily when I reach the present day; but, in dealing with figures which are already historical, one's judgments may be comparatively untrammelled.

I trace my paternal ancestry direct to a Russell who entered the House of Commons at the General Election of 1441, and since 1538 some of us have always sat in one or other of the two Houses of Parliament; so I may be fairly said to have the Parliamentary tradition in my blood. But I cannot profess to have taken any intelligent interest in political persons or doings before I was six years old; my retrospect, therefore, shall begin with Lord Palmerston, whom I can recall in his last Administration, 1859-1865.

I must confess that I chiefly remember his outward characteristics—his large, dyed, carefully Page 16 brushed whiskers; his broad-shouldered figure, which always seemed struggling to be upright; his huge and rather distorted feet—"each foot, to describe it mathematically, was a four-sided irregular figure"—his strong and comfortable seat on the old white hack which carried him daily to the House of Commons. Lord Granville described him to a nicety: "I saw him the other night looking very well, but old, and wearing a green shade, which he afterwards concealed. He looked like a retired old croupier from Baden."

Having frequented the Gallery of the House of Commons, or the more privileged seats "under the Gallery," from my days of knickerbockers, I often heard Palmerston speak. I remember his abrupt, jerky, rather "bow-wow"-like style, full of "hums" and "hahs"; and the sort of good-tempered but unyielding banter with which he fobbed off an inconvenient enquiry, or repressed the simple-minded ardour of a Radical supporter.

Of course, a boy's attention was attracted rather by appearance and manner than by the substance of a speech; so, for a frank estimate of Palmerston's policy at the period which I am discussing, I turn to Bishop Wilberforce (whom he had just refused to make Archbishop of York).

"That wretched Pam seems to me to get worse and worse. There is not a particle of veracity or noble feeling that I have ever been able to trace in him. He manages the House of Commons by debauching it, making all parties laugh at one another; the Tories at the Liberals, by his defeating Page 17 all Liberal measures; the Liberals at the Tories, by their consciousness of getting everything that is to be got in Church and State; and all at one another, by substituting low ribaldry for argument, bad jokes for principle, and an openly avowed, vainglorious, imbecile vanity as a panoply to guard himself from the attacks of all thoughtful men."

But what I remember even more clearly than Palmers ton is appearance or manner—perhaps because it did not end with his death—is the estimation in which he was held by that "Sacred Circle of the Great-Grandmotherhood" to which I myself belong....