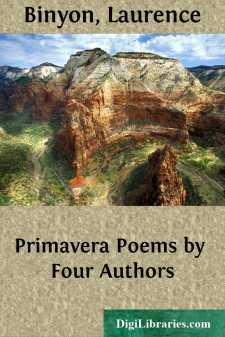 This little book was written by four friends, three of them under-graduates at Oxford, and all of them penetrated with the spirit of the higher culture of our time. The poems, it is clear, have been carefully selected; and, it is probable, have been diligently polished. There is not one which is not remarkable for delicacy of style and conscious aiming after excellence in art. Whether these qualities promise well for future achievement and development is a question open to debate. But there can be no doubt that in Primavera we possess another of those tiny verse-books like Ionica, or Mr. Percy Pinkerton's Galeazzo, which will not lose in freshness and in perfume as the years go by.

The poems have the distinction of making one wish to be acquainted with their authors. Though they differ a good deal in mental tone, perhaps also somewhat in literary merit, they possess marked common characteristics: a restrained refinement, a subdued reserve, a gentle melancholy; the note of the latest Anglican æsthetic school. We find no humour, no Sturm und Drang, no inequalities and incoherences of passion. Even where it is obvious that the emotion has been intense, possibly of a rare and peculiar strain, as in Mr. Binyon's "Testamentum Amoris" and Mr. Phillips's "To a Lost Love," the expression of it obeys no violence of impulse. A tender tone of regret, rather than of acute grief, steeps these stanzas (to quote one instance) addressed to a friend removed into the spiritual world by death.

"Oh, thou art cold! In that high sphereThou art a thing apart,Losing in saner happinessThis madness of the heart. "And yet, at times, thou still shalt feelA passing breath, a pain;Disturb'd, as though a door in heavenHad oped and closed again. "And thou shalt shiver, while the hymns,The solemn hymns, shall cease;A moment half remember me;Then turn away to peace."

It would be invidious to institute critical comparisons between the styles of these four friends and their respective merits. It may, however, be remarked that Mr. Manmohan Ghose's work possesses a peculiar interest on account of its really notable command of the subtleties of English prosody and diction, combined with just a touch of foreign feeling. The artful employment of imperfect rhymes in "Raymond and Ida" illustrates what I mean. Occasionally, too, Mr. Ghose produces exactly the right phrase by means of a felicitous simplicity. Notice the line which I have italicised in the following stanza:

"In the deep West the heavens grow heavenlier,Eve after eve; and stillThe glorious stars remember to appear;The roses on the hillAre fragrant as before;Only thy face, of all that's dear,I shall see nevermore!"

"Forget the shining of the stars, forgetThe vernal visitation of the rose."

There is but one piece of blank verse in the book. This prologue to "Orestes," by Mr. Stephen Phillips, has strength, is firm in outline, somewhat tardy in movement, fit for sonorous declamation....