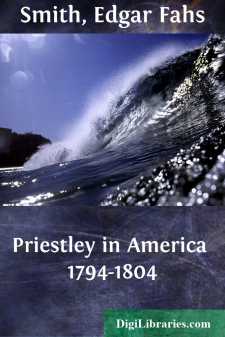 There lies before the writer a tube of glass, eleven and one half inches in length and a quarter of an inch in diameter. Its walls are thin. At one end there is evidence that an effort was made to bend this tube in the flame. Ordinarily it would be tossed aside; but this particular tube was given the writer years ago by a great-grandson of Joseph Priestley. Attached to the tube is a bit of paper upon which appear the words "piece of tubing used by Priestley." That legend has made the tube precious in the heart and to the eye of the writer. Everything relating to this wonderful figure in science, history, religion, politics and philosophy is very dear to him. On all sides of him are relics and reminders of Priestley. Not all, but many of his publications are near at hand. After perusal of these at various times, and while reading the many life sketches of Priestley, there has come the desire to know more about his activities during the decade (1794-1804) he lived in America. Isn't it fair to declare that the great majority of chemical students think of Priestley as working only in England, his native land, and never give thought to his efforts during the last ten years of his life? It has been said that he probably inspired and incited the young chemists of this country to renewed endeavor in their science upon his advent here. There is no question that he influenced James Woodhouse and his particular confreres most profoundly, as he did a younger generation, represented by Robert Hare. Priestley again set in rapid motion chemical research in the young Republic. He must therefore have done something himself. What was it? Is it worth while to learn the character of this work? Modern tendencies are antagonistic to the past. Many persons care nothing for history. It is a closed book. They do not wish it to be opened, and yet the present is built upon the early work. In reviewing the development of chemistry in this country everything, from the first happening here, should be laid upon the table for study and reflection. Thus believing, it will not be out of place to seek some light upon the occupation of the discoverer of oxygen after he came to live among us—with our fathers.

If, too, as you draw up to the fire 'betwixt the gloaming and the mirk' of these dull, cold November days, and note the little blue flame playing round the red-hot coals, think kindly of Priestley, for he first told us of the nature of that flame when in the exile to which our forefathers drove him.

Right there, "the nature of the flame," is one thing Priestley did explain in America. He discovered carbon monoxide—not in England, but in "exile." It may not be an epoch-making observation. There are not many such and those who make them are not legion in number. It was an interesting fact, with a very definite value, which has persisted through many succeeding decades and is so matter-of-fact that rarely does one arise to ask who first discovered this simple oxide of carbon....