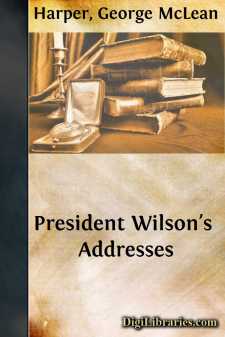 There has been a change of government. It began two years ago, when the House of Representatives became Democratic by a decisive majority. It has now been completed. The Senate about to assemble will also be Democratic. The offices of President and Vice-President have been put into the hands of Democrats. What does the change mean? That is the question that is uppermost in our minds to-day. That is the question I am going to try to answer, in order, if I may, to interpret the occasion.

It means much more than the mere success of a party. The success of a party means little except when the Nation is using that party for a large and definite purpose. No one can mistake the purpose for which the Nation now seeks to use the Democratic Party. It seeks to use it to interpret a change in its own plans and point of view. Some old things with which we had grown familiar, and which had begun to creep into the very habit of our thought and of our lives, have altered their aspect as we have latterly looked critically upon them, with fresh, awakened eyes; have dropped their disguises and shown themselves alien and sinister. Some new things, as we look frankly upon them, willing to comprehend their real character, have come to assume the aspect of things long believed in and familiar, stuff of our own convictions. We have been refreshed by a new insight into our own life.

We see that in many things that life is very great. It is incomparably great in its material aspects, in its body of wealth, in the diversity and sweep of its energy, in the industries which have been conceived and built up by the genius of individual men and the limitless enterprise of groups of men. It is great, also, very great, in its moral force. Nowhere else in the world have noble men and women exhibited in more striking forms the beauty and the energy of sympathy and helpfulness and counsel in their efforts to rectify wrong, alleviate suffering, and set the weak in the way of strength and hope. We have built up, moreover, a great system of government, which has stood through a long age as in many respects a model for those who seek to set liberty upon foundations that will endure against fortuitous change, against storm and accident. Our life contains every great thing, and contains it in rich abundance.

But the evil has come with the good, and much fine gold has been corroded. With riches has come inexcusable waste. We have squandered a great part of what we might have used, and have not stopped to conserve the exceeding bounty of nature, without which our genius for enterprise would have been worthless and impotent, scorning to be careful, shamefully prodigal as well as admirably efficient. We have been proud of our industrial achievements, but we have not hitherto stopped thoughtfully enough to count the human cost, the cost of lives snuffed out, of energies overtaxed and broken, the fearful physical and spiritual cost to the men and women and children upon whom the dead weight and burden of it all has fallen pitilessly the years through....