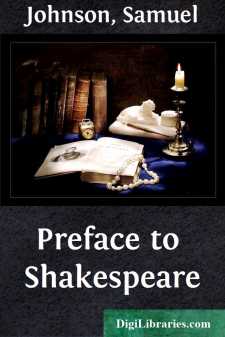 That praises are without reason lavished on the dead, and that the honours due only to excellence are paid to antiquity, is a complaint likely to be always continued by those, who, being able to add nothing to truth, hope for eminence from the heresies of paradox; or those, who, being forced by disappointment upon consolatory expedients, are willing to hope from posterity what the present age refuses, and flatter themselves that the regard which is yet denied by envy, will be at last bestowed by time.

Antiquity, like every other quality that attracts the notice of mankind, has undoubtedly votaries that reverence it, not from reason, but from prejudice. Some seem to admire indiscriminately whatever has been long preserved, without considering that time has sometimes co-operated with chance; all perhaps are more willing to honour past than present excellence; and the mind contemplates genius through the shades of age, as the eye surveys the sun through artificial opacity. The great contention of criticism is to find the faults of the moderns, and the beauties of the ancients. While an authour is yet living we estimate his powers by his worst performance, and when he is dead we rate them by his best.

To works, however, of which the excellence is not absolute and definite, but gradual and comparative; to works not raised upon principles demonstrative and scientifick, but appealing wholly to observation and experience, no other test can be applied than length of duration and continuance of esteem. What mankind have long possessed they have often examined and compared, and if they persist to value the possession, it is because frequent comparisons have confirmed opinion in its favour. As among the works of nature no man can properly call a river deep or a mountain high, without the knowledge of many mountains and many rivers; so in the productions of genius, nothing can be stiled excellent till it has been compared with other works of the same kind. Demonstration immediately displays its power, and has nothing to hope or fear from the flux of years; but works tentative and experimental must be estimated by their proportion to the general and collective ability of man, as it is discovered in a long succession of endeavours. Of the first building that was raised, it might be with certainty determined that it was round or square, but whether it was spacious or lofty must have been referred to time. The Pythagorean scale of numbers was at once discovered to be perfect; but the poems of Homer we yet know not to transcend the common limits of human intelligence, but by remarking, that nation after nation, and century after century, has been able to do little more than transpose his incidents, new name his characters, and paraphrase his sentiments.

The reverence due to writings that have long subsisted arises therefore not from any credulous confidence in the superior wisdom of past ages, or gloomy persuasion of the degeneracy of mankind, but is the consequence of acknowledged and indubitable positions, that what has been longest known has been most considered, and what is most considered is best understood....