Preface to a Dictionary of the English Language 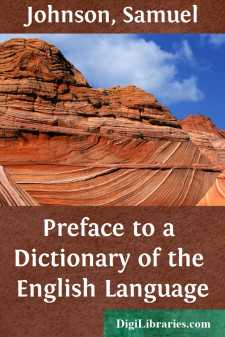 It is the fate of those who toil at the lower employments of life, to be rather driven by the fear of evil, than attracted by the prospect of good; to be exposed to censure, without hope of praise; to be disgraced by miscarriage, or punished for neglect, where success would have been without applause, and diligence without reward.

Among these unhappy mortals is the writer of dictionaries; whom mankind have considered, not as the pupil, but the slave of science, the pionier of literature, doomed only to remove rubbish and clear obstructions from the paths through which Learning and Genius press forward to conquest and glory, without bestowing a smile on the humble drudge that facilitates their progress. Every other authour may aspire to praise; the lexicographer can only hope to escape reproach, and even this negative recompense has been yet granted to very few.

I have, notwithstanding this discouragement, attempted a dictionary of the English language, which, while it was employed in the cultivation of every species of literature, has itself been hitherto neglected; suffered to spread, under the direction of chance, into wild exuberance; resigned to the tyranny of time and fashion; and exposed to the corruptions of ignorance, and caprices of innovation.

When I took the first survey of my undertaking, I found our speech copious without order, and energetick without rules: wherever I turned my view, there was perplexity to be disentangled, and confusion to be regulated; choice was to be made out of boundless variety, without any established principle of selection; adulterations were to be detected, without a settled test of purity; and modes of expression to be rejected or received, without the suffrages of any writers of classical reputation or acknowledged authority.

Having therefore no assistance but from general grammar, I applied myself to the perusal of our writers; and noting whatever might be of use to ascertain or illustrate any word or phrase, accumulated in time the materials of a dictionary, which, by degrees, I reduced to method, establishing to myself, in the progress of the work, such rules as experience and analogy suggested to me; experience, which practice and observation were continually increasing; and analogy, which, though in some words obscure, was evident in others.

In adjusting the ORTHOGRAPHY, which has been to this time unsettled and fortuitous, I found it necessary to distinguish those irregularities that are inherent in our tongue, and perhaps coeval with it, from others which the ignorance or negligence of later writers has produced. Every language has its anomalies, which, though inconvenient, and in themselves once unnecessary, must be tolerated among the imperfections of human things, and which require only to be registered, that they may not be increased, and ascertained, that they may not be confounded: but every language has likewise its improprieties and absurdities, which it is the duty of the lexicographer to correct or proscribe.

As language was at its beginning merely oral, all words of necessary or common use were spoken before they were written; and while they were unfixed by any visible signs, must have been spoken with great diversity, as we now observe those who cannot read catch sounds imperfectly, and utter them negligently. When this wild and barbarous jargon was first reduced to an alphabet, every penman endeavoured to express, as he could, the sounds which he was accustomed to pronounce or to receive, and vitiated in writing such words as were already vitiated in speech....