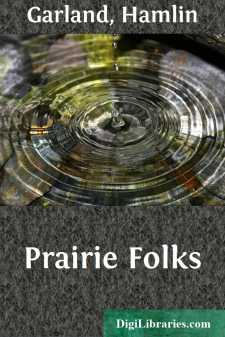 Uncle Ethan had a theory that a man's character could be told by the way he sat in a wagon seat.

Uncle Ripley was prejudiced in favor of the stranger, therefore, before he came opposite the potato patch, where the old man was "bugging his vines." The stranger drove a jaded-looking pair of calico ponies, hitched to a clattering democrat wagon, and he sat on the extreme end of the seat, with the lines in his right hand, while his left rested on his thigh, with his little finger gracefully crooked and his elbows akimbo. He wore a blue shirt, with gay-colored armlets just above the elbows, and his vest hung unbuttoned down his lank ribs. It was plain he was well pleased with himself.

As he pulled up and threw one leg over the end of the seat, Uncle Ethan observed that the left spring was much more worn than the other, which proved that it was not accidental, but that it was the driver's habit to sit on that end of the seat.

"Plenty enough, I gol! I don't see where they all come fum."

"Early Rose?" inquired the man, as if referring to the bugs.

"No; Peachblows an' Carter Reds. My Early Rose is over near the house. The old woman wants 'em near. See the darned things!" he pursued, rapping savagely on the edge of the pan to rattle the bugs back.

Uncle Ethan was wondering what the man was. He had some pots of black paint in the wagon, and two or three square boxes.

"What do yeh think o' Cleveland's chances for a second term?" continued the man, as if they had been talking politics all the while.

"That's so—it's a purty scaly outlook. I don't believe in second terms myself," the man hastened to say.

"Is that your new barn acrost there?" pointing with his whip.

"Yes, sir, it is," replied the old man, proudly. After years of planning and hard work he had managed to erect a little wooden barn, costing possibly three hundred dollars. It was plain to be seen he took a childish pride in the fact of its newness.

The stranger mused. "A lovely place for a sign," he said, as his eyes wandered across its shining yellow broadside.

Uncle Ethan stared, unmindful of the bugs crawling over the edge of his pan. His interest in the pots of paint deepened.

"Couldn't think o' lettin' me paint a sign on that barn?" the stranger continued, putting his locked hands around one knee, and gazing away across the pig-pen at the building.

"What kind of a sign? Gol darn your skins!" Uncle Ethan pounded the pan with his paddle and scraped two or three crawling abominations off his leathery wrist....