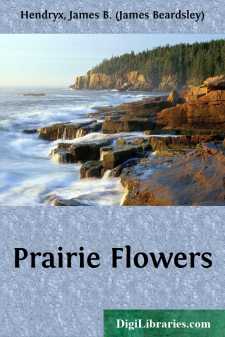 The grey roadster purred up the driveway, and Alice Endicott thrust the "home edition" aside and hurried out onto the porch to greet her husband as he stepped around from the garage.

"Did the deal go through?" she asked, as her eyes eagerly sought the eyes of the man who ascended the steps.

"Yes, dear," laughed Endicott, "the deal went through. You see before you a gentleman of elegant leisure—foot-loose, and unfettered—free to roam where the gods will."

"Or will not," laughed his wife, giving him a playful hug. "But, oh, Win, aren't you glad! Isn't it just grand to feel that you don't have to go to the horrible, smoky old city every morning? And don't the soft air, and the young leaves, and the green grass, and the nesting birds make you crazy to get out into the big open places? To get into a saddle and just ride, and ride, and ride? Remember how the sun looked as it rose like a great ball of fire beyond the miles and miles of open bench?"

Endicott grinned: "And how it beat down on us along about noon until we could fairly feel ourselves shrivel——"

"And how it sank to rest behind the mountains. And the long twilight glow. And how the stars came out one by one. And the night came deliciously cool—and how good the blankets felt."

The man's glance rested upon the close-cropped lawn where the grackles and robins were industriously picking up their evening meal. "You love the country out there—you must love it, to remember only the sunrises, and the sunsets, and the stars; and forget the torture of long hours in the saddle and that terrific downpour of rain that burst the reservoir and so nearly cost us our lives, and the dust storm in the bad lands, and that night of horrible thirst. Why those few days we spent in Montana, between the time of the wreck at Wolf River and our wedding at Timber City, were the most tumultuously adventurous days of our lives!"

His wife's eyes were shining: "Wasn't it awful—the suspense and the excitement! And, yet, wasn't it just grand? We'll never forget it as long as we live——"

Endicott smiled grimly: "We never will," he agreed, with emphasis. "A man isn't likely to forget—things like that."

Alice seated herself upon the porch lounge where her husband joined her, and for several minutes they watched a robin divide a fat worm between the scrawny necked fledglings that thrust their ugly mouths above the edge of the nest in the honeysuckle vine close beside them.

"It was nearly a year ago, Win," the girl breathed, softly; "our anniversary is just thirteen days away."

"And you still want to spend it in Timber City?"

"Indeed I do! Why it would just break my heart not to be right there in that ugly little wooden town on that day."

"And you really—seriously—want to live out there?"

"Of course I do! Why wouldn't anyone want to live there? That's real living—with the wonderful air, and the mountains, and the boundless unfenced range! Not right in Timber City, or any of the other towns, but on a ranch, somewhere. We could stay there till we got tired of it, and then go to California, or New York, or Florida for a change. But we could call the ranch home, and live there most of the time. Now that you have closed out your business, there is no earthly reason why we should live in this place—it's neither east nor west, nor north, nor south—it's just half way between everything. I wish we would hear from that Mr. Carlson, or whatever his name is so we could go and look over his ranch the day after our anniversary."

"His name is Colston, and we have heard," smiled Endicott. "I got word this morning."

"He said to come and look the property over. That he was willing to sell, and that he thought there was no doubt about our being able to arrange satisfactory terms."

"Oh, Win, aren't you glad! You must sit right down after dinner and write him. Tell him we'll——"

"I wired him this afternoon to meet us in Timber City."

"Let's see," Alice chattered, excitedly, "it will take—one night to Chicago, and a day to St....