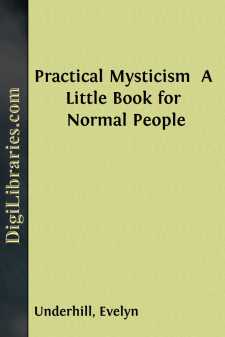 This little book, written during the last months of peace, goes to press in the first weeks of the great war. Many will feel that in such a time of conflict and horror, when only the most ignorant, disloyal, or apathetic can hope for quietness of mind, a book which deals with that which is called the "contemplative" attitude to existence is wholly out of place. So obvious, indeed, is this point of view, that I had at first thought of postponing its publication. On the one hand, it seems as though the dreams of a spiritual renaissance, which promised so fairly but a little time ago, had perished in the sudden explosion of brute force. On the other hand, the thoughts of the English race are now turned, and rightly, towards the most concrete forms of action--struggle and endurance, practical sacrifices, difficult and long-continued effort--rather than towards the passive attitude of self-surrender which is all that the practice of mysticism seems, at first sight, to demand. Moreover, that deep conviction of the dependence of all human worth upon eternal values, the immanence of the Divine Spirit within the human soul, which lies at the root of a mystical concept of life, is hard indeed to reconcile with much of the human history now being poured red-hot from the cauldron of war. For all these reasons, we are likely during the present crisis to witness a revolt from those superficially mystical notions which threatened to become too popular during the immediate past.

Yet, the title deliberately chosen for this book--that of "Practical" Mysticism--means nothing if the attitude and the discipline which it recommends be adapted to fair weather alone: if the principles for which it stands break down when subjected to the pressure of events, and cannot be reconciled with the sterner duties of the national life. To accept this position is to reduce mysticism to the status of a spiritual plaything. On the contrary, if the experiences on which it is based have indeed the transcendent value for humanity which the mystics claim for them--if they reveal to us a world of higher truth and greater reality than the world of concrete happenings in which we seem to be immersed--then that value is increased rather than lessened when confronted by the overwhelming disharmonies and sufferings of the present time. It is significant that many of these experiences are reported to us from periods of war and distress: that the stronger the forces of destruction appeared, the more intense grew the spiritual vision which opposed them. We learn from these records that the mystical consciousness has the power of lifting those who possess it to a plane of reality which no struggle, no cruelty, can disturb: of conferring a certitude which no catastrophe can wreck. Yet it does not wrap its initiates in a selfish and otherworldly calm, isolate them from the pain and effort of the common life. Rather, it gives them renewed vitality; administering to the human spirit not--as some suppose--a soothing draught, but the most powerful of stimulants. Stayed upon eternal realities, that spirit will be far better able to endure and profit by the stern discipline which the race is now called to undergo, than those who are wholly at the mercy of events; better able to discern the real from the illusory issues, and to pronounce judgment on the new problems, new difficulties, new fields of activity now disclosed. Perhaps it is worth while to remind ourselves that the two women who have left the deepest mark upon the military history of France and England--Joan of Arc and Florence Nightingale--both acted under mystical compulsion. So, too, did one of the noblest of modern soldiers, General Gordon. Their national value was directly connected with their deep spiritual consciousness: their intensely practical energies were the flowers of a contemplative life.

We are often told, that in the critical periods of history it is the national soul which counts: that "where there is no vision, the people perish." No nation is truly defeated which retains its spiritual self-possession. No nation is truly victorious which does not emerge with soul unstained. If this be so, it becomes a part of true patriotism to keep the spiritual life, both of the individual citizen and of the social group, active and vigorous; its vision of realities unsullied by the entangled interests and passions of the time. This is a task in which all may do their part. The spiritual life is not a special career, involving abstraction from the world of things....