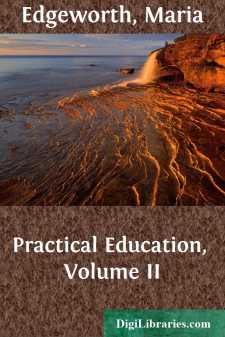 Add to My Favorites
Published: 9 years ago
Downloads: 159
Rating: (0 Votes)

ON GRAMMAR, AND CLASSICAL LITERATURE.

As long as gentlemen feel a deficiency in their own education, when they have not a competent knowledge of the learned languages, so long must a parent be anxious, that his son should not be exposed to the mortification of appearing inferiour to others of his own rank. It is in vain to urge, that language is only the key to science; that the names of things are not the things themselves; that many of the words in our own language convey scarcely any, or at best but imperfect, ideas; that the true genius, pronunciation, melody, and idiom of Greek, are unknown to the best scholars, and that it cannot reasonably be doubted, that if Homer or Xenophon were to hear their works read by a professor of Greek, they would mistake them for the sounds of an unknown language. All this is true; but it is not the ambition of a gentleman to read Greek like an ancient Grecian, but to understand it as well as the generality of his contemporaries; to know whence the terms of most sciences are derived, and to be able, in some degree, to trace the progress of mankind in knowledge and refinement, by examining the extent and combination of their different vocabularies.

In some professions, Greek is necessary; in all, a certain proficiency of Latin is indispensable; how, therefore, to acquire this proficiency in the one, and a sufficient knowledge of the other, with the least labour, the least waste of time, and the least danger to the understanding, is the material question. Some school-masters would add, that we must expedite the business as much as possible: of this we may be permitted to doubt. Festina lente is one of the most judicious maxims in education, and those who have sufficient strength of mind to adhere to it, will find themselves at the goal, when their competitors, after all their bustle, are panting for breath, or lashing their restive steeds. We see some untutored children start forward in learning with rapidity: they seem to acquire knowledge at the very time it is wanted, as if by intuition; whilst others, with whom infinite pains have been taken, continue in dull ignorance; or, having accumulated a mass of learning, are utterly at a loss how to display, or how to use their treasures. What is the reason of this phenomenon? and to which class of children would a parent wish his son to belong? In a certain number of years, after having spent eight hours a day in "durance vile," by the influence of bodily fear, or by the infliction of bodily punishment, a regiment of boys may be drilled by an indefatigable usher into what are called scholars; but, perhaps, in the whole regiment not one shall ever distinguish himself, or ever emerge from the ranks. Can it be necessary to spend so many years, so many of the best years of life, in toil and misery? We shall calculate the waste of time which arises from the study of ill written, absurd grammar, and exercise-books; from the habits of idleness contracted by school-boys, and from the custom of allowing holydays to young students; and we shall compare the result of this calculation with the time really necessary for the attainment of the same quantity of classical knowledge by rational methods....