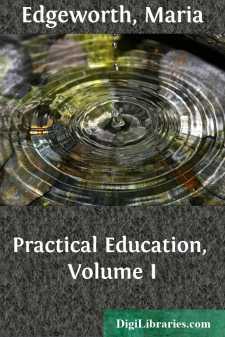 We shall not imitate the invidious example of some authors, who think it necessary to destroy the edifices of others, in order to clear the way for their own. We have no peculiar system to support, and, consequently, we have no temptation to attack the theories of others; and we have chosen the title of Practical Education, to point out that we rely entirely upon practice and experience.

To make any progress in the art of education, it must be patiently reduced to an experimental science: we are fully sensible of the extent and difficulty of this undertaking, and we have not the arrogance to imagine, that we have made any considerable progress in a work, which the labours of many generations may, perhaps, be insufficient to complete; but we lay before the publick the result of our experiments, and in many instances the experiments themselves. In pursuing this part of our plan, we have sometimes descended from that elevation of style, which the reader might expect in a quarto volume; we have frequently been obliged to record facts concerning children which may seem trifling, and to enter into a minuteness of detail which may appear unnecessary. No anecdotes, however, have been admitted without due deliberation; nothing has been introduced to gratify the idle curiosity of others, or to indulge our own feelings of domestic partiality.

In what we have written upon the rudiments of science, we have pursued an opposite plan; so far from attempting to teach them in detail, we refer our readers to the excellent treatises on the different branches of science, and on the various faculties of the human mind, which are to be found in every language. The chapters that we have introduced upon these subjects, are intended merely as specimens of the manner in which we think young children should be taught. We have found from experience, that an early knowledge of the first principles of science may be given in conversation, and may be insensibly acquired from the usual incidents of life: if this knowledge be carefully associated with the technical terms which common use may preserve in the memory, much of the difficulty of subsequent instruction may be avoided.

The sketches we have hazarded upon these subjects, may to some appear too slight, and to others too abstruse and tedious. To those who have explored the vast mines of human knowledge, small specimens appear trifling and contemptible, whilst the less accustomed eye is somewhat dazzled and confused by the appearance even of a small collection: but to the most enlightened minds, new combinations may be suggested by a new arrangement of materials, and the curiosity and enthusiasm of the inexperienced may be awakened, and excited to accurate and laborious researches.

With respect to what is commonly called the education of the heart, we have endeavoured to suggest the easiest means of inducing useful and agreeable habits, well regulated sympathy and benevolent affections. A witty writer says, "Il est permis d'ennuyer en moralites d'ici jusqu' a Constantinople." Unwilling to avail ourselves of this permission, we have sedulously avoided declamation, and, wherever we have been obliged to repeat ancient maxims, and common truths, we have at least thought it becoming to present them in a new dress.

On religion and politics we have been silent, because we have no ambition to gain partisans, or to make proselytes, and because we do not address ourselves exclusively to any sect or to any party. The scrutinizing eye of criticism, in looking over our table of contents, will also, probably, observe that there are no chapters on courage and chastity. To pretend to teach courage to Britons, would be as ridiculous as it is unnecessary; and, except amongst those who are exposed to the contagion of foreign manners, we may boast of the superior delicacy of our fair countrywomen; a delicacy acquired from domestic example, and confirmed by publick approbation. Our opinions concerning the female character and understanding, have been fully detailed in a former publication; and, unwilling to fatigue by repetition, we have touched but slightly upon these subjects in our chapters on Temper, Female Accomplishments, Prudence, and Economy.

We have warned our readers not to expect from us any new theory of education, but they need not apprehend that we have written without method, or that we have thrown before them a heap of desultory remarks and experiments, which lead to no general conclusions, and which tend to the establishment of no useful principles. We assure them that we have worked upon a regular plan, and where we have failed of executing our design, it has not been for want of labour or attention....