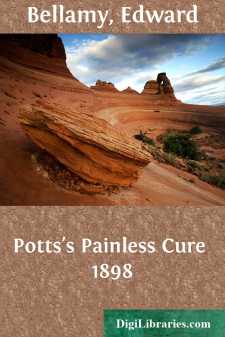 "Must you go up to that tiresome old college again to-night?"

Pouting lips and delicate brows fretted in pretty importunity over the troubled eyes enforced the pleading tones, and yet the young man to whom they were addressed found strength to reply:—

"I 'm afraid I can't get rid of it. I particularly promised Sturgis I would look in on him, and it won't do for me to cut my acquaintance with the class entirely just because I 'm having such a jolly time down here."

The hurt tone and pretended pique with which she said this were assuredly all that was needed to make the petite teaser irresistible. But the young man replied, regarding her the while with an admiration in which there was a singular expression of uneasiness:—

"'I could not love thee, dear, so much,Loved I not honor more!'"

And transferring her hand to his lips he loosed its soft, lingering clasp and was gone, stopping at the gate to throw back a kiss to her as she stood in the porch, by way of amends for his hasty parting.

"George Hunt, you 're an infernal scamp!"

These were the opprobrious words he muttered to himself as he passed out of earshot. The beneficent common law does not condemn a man merely on his own confession unless circumstances in evidence lend probability to his self-accusation. Before we coincide in Mr. Hunt's opinion of himself, let us therefore inquire into the circumstances.

He was in the last term of senior year at ——— college. For the past year he had been boarding at the Giffords', and Annie and he had fallen in love. The fall on his part had been quite voluntary and deliberate. He had fallen in love because it was the correct thing for a young collegian, engaged in the study of the humanities, to be in love, and made him feel more like a man than smoking, drinking, or even sporting a stove-pipe hat and cane. Vanity aside, it was very jolly to have a fine, nice girl who thought no end of a fellow, to walk, talk, and sing with, and to have in mind when one sang the college songs about love and wine with the fellows. And it gave him also a very agreeable sense of superior experience as he mingled in their discussions of women and the tender passion.

But withal he was a conscientious, kind-hearted young fellow enough, and had suffered occasional qualms of conscience when little words or incidents had impressed him with the knowledge that Annie's love for him was a more serious matter than his for her. He felt that by insisting on exchanging the pure gold of her earnest affection for the pinchbeck of his passing fancy, she was making a rogue of him. He should be in no position to marry for years, nor did he want to; and if he had wanted to, though he felt terribly hard-hearted when he owned it to himself, his feeling toward Annie was not quite so deep as to be a real wish to marry her. As his last year in college approached its end, he had thought more and more of these things, and had returned from his last vacation determined to begin to draw gradually away from her, and without any shock to bring their relations back to the footing of friendship....