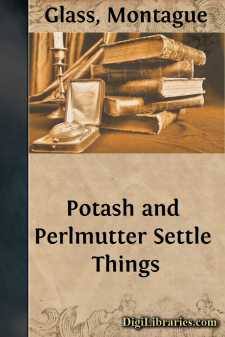 THEY ARRIVE, AND SO DOES THE PRESIDENT

"Nu, what's the matter now?" Morris Perlmutter asked, as he entered the office one morning after the cessation of hostilities on the western front.

"Ai, tzuris!" Abe moaned in reply, and for at least a minute he continued to rock to and fro in his chair and to make incoherent noises through his nostrils in the manner of a person suffering either from toothache or the recent cancelation of a large order.

"It serves you right," Morris said. "I told you you shouldn't eat that liberty roast at Wasserbauer's yesterday. It used to give you the indigestion when it was known as Koenigsburger Klops, which it is like the German Empire now calling itself the German Republic; changing its name ain't going to alter its poisonous disposition none."

"That's right!" Abe said. "Make jokes, why don't you? You are worser as this here feller Zero."

"Zero the emperor what fiddled when Rome was burning," Abe replied. "He's got nothing on you. You would fiddle if Rome, Watertown, and Ogdensburg was burning."

"I don't know what you are talking about at all," Morris said. "And, besides, the feller's name was Nero, not Zero."

"That's what you say," Abe commented, "which you also said that the operators was only bluffing and that they wouldn't strike on us in a thousand years, and considering that you said this only yesterday, Mawruss, it's already wonderful how time flies."

"Well," Morris said, "how could I figure that them lunatics is going to pick out the time when we've got practically no work for them and was going to fire them, anyway, to call a strike on us?"

"You should ought to have figured that way," Abe declared. "Didn't the Kaiser abdicate just before them Germans got ready to kick him out?"

"I know it ain't," Abe agreed. "Kings has got their worries, too, but when it comes to laying awake nights trying to figure out whether them designers somewheres in France is going to turn out long, full skirts or short, narrow skirts for the fall and winter of nineteen-nineteen and nineteen-twenty, Mawruss, I bet yer the entire collection of kings, active or retired, doesn't got to take two grains of trional between them."

"Well, some one has got to do the worrying around here, Mawruss," Abe said, "which if it rested with you, y'understand, we could make up a line of samples for next season that wouldn't be no more like Paris designs than General Pershing looks like his pictures in the magazines."

"Say, for that matter," Morris said, "we are just as good guessers as our competitors; on account the way things is going nowadays, nobody is going to try to make a trip to Paris to get fashion designs, because if he figured on crossing the ocean to buy model gowns for the fall and winter of nineteen-nineteen and nineteen-twenty, y'understand, between the time that he applied for his passport and the time the government issued it to him, y'understand, it would already be the spring and summer season of nineteen-twenty-four and nineteen-twenty-five....