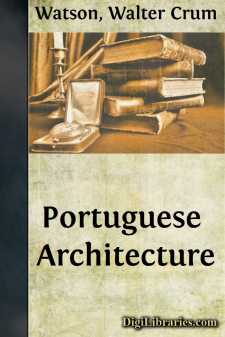 No one can look at a map of the Iberian Peninsula without being struck by the curious way in which it is unequally divided between two independent countries. Spain occupies by far the larger part of the Peninsula, leaving to Portugal only a narrow strip on the western seaboard some one hundred miles wide and three hundred and forty long. Besides, the two countries are separated the one from the other by merely artificial boundaries. The two largest rivers of the Peninsula, the Douro and the Tagus, rise in Spain, but finish their course in Portugal, and the Guadiana runs for some eighty miles through Portuguese territory before acting for a second time as a boundary between the two countries. The same, to a lesser degree, is true of the mountains. The Gerez and the Marão are only offshoots of the Cantabrian mountains, and the Serra da Estrella in Beira is but a continuation of the Sierra de Gata which separates Leon from Spanish Estremadura. Indeed the only natural frontiers are formed by the last thirty miles of the Minho in the north, by about eighty miles of the Douro, which in its deep and narrow gorge really separates Traz os Montes from Leon; by a few miles of the Tagus, and by the Guadiana both before and after it runs through a part of Alemtejo.

If the languages of the two countries were radically unlike this curious division would be more easy to understand, but in reality Castilian differs from Portuguese rather in pronunciation than in anything else; indeed differs less from Portuguese than it does from Cataluñan.

During the Roman dominion none of the divisions of the Peninsula corresponded exactly with Portugal. Lusitania, which the poets of the Renaissance took to be the Roman name of their country, only reached up to the Douro, and took in a large part of Leon and the whole of Spanish Estremadura.

In the time of the Visigoths, a Suevic kingdom occupied most of Portugal to the north of the Tagus, but included also all Galicia and part of Leon; and during the Moorish occupation there was nothing which at all corresponded with the modern divisions.

It was, indeed, only by the gradual Christian re-conquest of the country from the Moors that Portugal came into existence, and only owing to the repeated failure of the attempt to unite the two crowns of Portugal and Castile by marriage that they have remained separated to the present day.

Of the original inhabitants of what is now Portugal little is known, but that they were more Celtic than Iberian seems probable from a few Celtic words which have survived, such as Mor meaning great as applied to the Capella Mor of a church or to the title of a court official. The name too of the Douro has probably nothing to do with gold but is connected with a Celtic word for water. The Tua may mean the 'gushing' river, and the Ave recalls the many Avons. Ebora, now Evora, is very like the Roman name of York, Eboracum. Briga, too, the common termination of town names in Roman times as in Conimbriga—Condeixa a Velha—or Cetobriga, near Setubal—in Celtic means height or fortification. All over the country great rude stone monuments are to be found, like those erected by primitive peoples in almost every part of Europe, and the most interesting, the curious buildings found at various places near Guimarães, seem to belong to a purely Celtic civilisation.

The best-known of these places, now called Citania—from a name of a native town mentioned by ancient writers—occupies the summit of a hill about nine hundred feet above the road and nearly half-way between Guimarães and Braga. The top of this hill is covered with a number of structures, some round from fifteen to twenty feet across, and some square, carefully built of well-cut blocks of granite. The only opening is a door which is often surrounded by an architrave adorned with rough carving; the roofs seem to have been of wood and tiles.

Some, not noticing the three encircling walls and the well-cut water-channels, and thinking that the round buildings far exceeded the rectangular in number, have thought that they might have been intended for granaries where corn might be stored against a time of war. But it seems far more likely that Citania was a town placed on this high hill for safety. Though the remains show no other trace of Roman civilisation, one or two of the houses are inscribed with their owner's names in Roman character, and from coins found there they seem to have been inhabited long after the surrounding valleys had been subdued by the Roman arms, perhaps even after the great baths had been built not far off at the hot springs of Taipas....