Popular Tales from the Norse 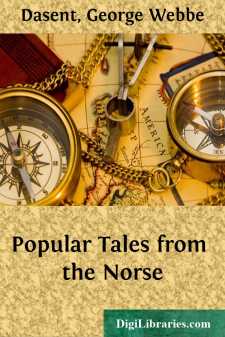 Add to My Favorites
Published: 9 years ago
Downloads: 151
Rating: (0 Votes)

The most careless reader can hardly fail to see that many of the Tales in this volume have the same groundwork as those with which he has been familiar from his earliest youth. They are Nursery Tales, in fact, of the days when there were tales in nurseries—old wives' fables, which have faded away before the light of gas and the power of steam. It is long, indeed, since English nurses told these tales to English children by force of memory and word of mouth. In a written shape, we have long had some of them, at least, in English versions of the Contes de ma Mère l' Oye of Perrault, and the Contes de Fées of Madame D'Aulnoy; those tight-laced, high- heeled tales of the 'teacup times' of Louis XIV and his successors, in which the popular tale appears to as much disadvantage as an artless country girl in the stifling atmosphere of a London theatre. From these foreign sources, after the voice of the English reciter was hushed—and it was hushed in England more than a century ago—our great-grandmothers learnt to tell of Cinderella and Beauty and the Beast, of Little Red Riding-hood and Blue Beard, mingled together in the Cabinet des Fées with Sinbad the Sailor and Aladdin's wondrous lamp; for that was an uncritical age, and its spirit breathed hot and cold, east and west, from all quarters of the globe at once, confusing the traditions and tales of all times and countries into one incongruous mass of fable, as much tangled and knotted as that famous pound of flax which the lassie in one of these Tales is expected to spin into an even wool within four-and-twenty hours. No poverty of invention or want of power on the part of translators could entirely destroy the innate beauty of those popular traditions; but here, in England at least, they had almost dwindled out, or at any rate had been lost sight of as home-growths. We had learnt to buy our own children back, disguised in foreign garb; and as for their being anything more than the mere pastime of an idle hour—as to their having any history or science of their own—such an absurdity was never once thought of. It had, indeed, been remarked, even in the eighteenth century—that dreary time of indifference and doubt—that some of the popular traditions of the nations north of the Alps contained striking resemblances and parallels to stories in the classical mythology. But those were the days when Greek and Latin lorded it over the other languages of the earth; and when any such resemblance or analogy was observed, it was commonly supposed that that base-born slave, the vulgar tongue, had dared to make a clumsy copy of something peculiarly belonging to the twin tyrants who ruled all the dialects of the world with a pedant's rod.

At last, just at the close of that great war which Western Europe waged against the genius and fortune of the first Napoleon; just as the eagle—Prometheus and the eagle in one shape—was fast fettered by sheer force and strength to his rock in the Atlantic, there arose a man in Central Germany, on the old Thuringian soil, to whom it was given to assert the dignity of vernacular literature, to throw off the yoke of classical tyranny, and to claim for all the dialects of Teutonic speech a right of ancient inheritance and perfect freedom before unsuspected and unknown....