Popular Lectures on Zoonomia Or The Laws of Animal Life, in Health and Disease 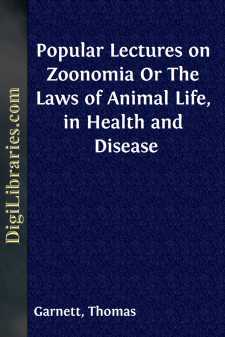 DR. GARNETT was born at Casterton, near Kirkby Lonsdale, Westmoreland, on the 21st of April, 1766. During the first fifteen years of his life, he remained with his parents, and was instructed by them in the precepts of the established church of England, from which he drew that scheme of virtue, by which every action of his future life was to be governed. The only school education he received during these early years, was at Barbon, a small village near his native place, to which his father had removed the year after he was born. The school was of so little consequence, that its master changed not less than three times during the space of seven or eight years, and the whole instruction he received, was comprehended in the rudiments of the English grammar, a small portion of Latin, and a little French, together with the general principles of arithmetic. His bodily constitution was from the beginning weak and susceptible; he was unequal to joining in the boisterous amusements of his companions, while from the liveliness of his disposition he could not remain a moment idle. To these circumstances we are, perhaps, to attribute the uncommon progress he made in every branch of knowledge to which he afterwards applied himself.

Whilst a schoolboy, the susceptibility of his mind, and a diffidence of character connected with it, caused him to associate very little with his schoolfellows: he dreaded the displeasure of his preceptor, as the greatest misfortune which could befal him The moment he arrived at home, he set about preparing his lesson for the next day; and as soon as this was accomplished, he amused himself by contriving small pieces of mechanism, which he exhibited with conscious satisfaction to his friends. His temper was warm and enthusiastic; whatever came within the narrow circle of his early knowledge he would attempt to imitate. He saw no difficulties before hand, nor was he discouraged when he met with them. At the early age of eleven years, he had somewhere seen a dial and a quadrant, and was able to imitate these instruments, nay, with the assistance of the latter, and the small knowledge of arithmetic and trigonometry, which he had then obtained, he formally marched out with his younger brother, and rudely attempted to measure the height of a mountain behind his father's house. When he was nearly fifteen years of age, he was, at his earnest desire, put apprentice to the celebrated mathematician, Mr. Dawson, of Sedbergh, who was at that time a surgeon and apothecary. This situation was peculiarly advantageous to him, on account of the great mathematical knowledge of his master, by whom he was instructed in the different branches of this science; and, notwithstanding his constant employment in necessary business, his ardent pursuit of professional information, and his extreme youth, in the course of four years, he became well acquainted with mechanics, hydrostatics, optics, and astronomy. He afterwards applied himself with energy to the study of chemistry, and other subjects, with which it was thought expedient that he should be acquainted, previously to attending the medical lectures in the University of Edinburgh....