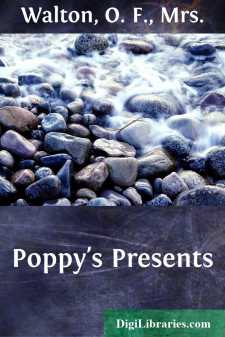 he great cathedral bell was striking twelve. Slowly and solemnly it struck, and as it did so people looked at their watches and altered their clocks, for every one in the great city kept time by that grave old bell. Every one liked to hear it strike; but the school children liked it best of all, for they knew that with the last stroke of twelve lessons would be over, and they would be able to run home to dinner.

'Good morning, ma'am,' said the girls, and then they marched out like soldiers in single file. So quiet they were, so grave, so orderly they went, almost as solemnly as the old bell itself.

But only till they reached the school door. Then they broke up into a merry noisy crowd, running and shouting, chasing each other from side to side, jumping, hopping, and skipping as they went down the street.

'Oh dear, what a noise them children do make!' said old Mrs. North, as she got up and shut her cottage door.

But the noise soon died away, for the children were hungry, and they were hurrying home to dinner.

What is that little bit of red that we see in front of the crowd? It is a little girl in a scarlet cloak, and she is turning down a long straight road which leads into the heart of the city. Let us follow her and see where she is going. She is very tidily dressed; there is a clean white holland pinafore under the scarlet cloak, and although her shoes are old, they are well patched and mended. But she is turning into a very poor part of the city—the streets are getting narrower and more crowded, and they are getting darker, too, for the quaint, old-fashioned houses overhang the pavement, and so nearly meet overhead, that very little light or air can get into the dismal street below.

Still on and on goes the little red cloak. And now she is turning down a court on the left-hand side of the street. An open court it ought to be, with a row of houses on each side, and an open space in the middle; but it is not an open space to-day, for it is everybody's washing-day in Grey Friars Court, and long lines are stretched from side to side, and shirts and petticoats and stockings and all manner of garments are waving in the breeze.

The little red cloak threads her way underneath; sometimes the corner of a wet towel hits her in the face, sometimes she has to bend almost double to get underneath a dripping blanket or sheet. But she makes her way through them all, and passes on to the last house in that long dingy court, and as she does so she notices a little crowd of women standing by her mother's door. There is old Mrs. Smith leaning on her crutches, and Sarah Anne Spavin and her mother, and Mrs. Lee with her baby in her arms, and Mrs. Holliday, with Tommy and Freddy and Ann Eliza. And as she looks up she sees several faces looking out of the windows overhead.

What could be the matter? Had anything happened to her mother? Was her mother dead? That was her first thought, poor child. But nobody was looking particularly grave, and they laughed as they caught sight of the little red cloak coming under the white sheets and table-cloths.

'Why, here's Poppy!' said Mrs. Holliday, as she came up to them.

'Well, Poppy,' cried another, 'have you heard the news?'

'Your mother's got a present for you, Poppy,' said Sarah Anne Spavin; 'you'd better hurry in and have a look at it.'

But the women only laughed and bade her go and see.

And the faces at the window overhead laughed too, and said there was such a thing as having too much of a good thing....