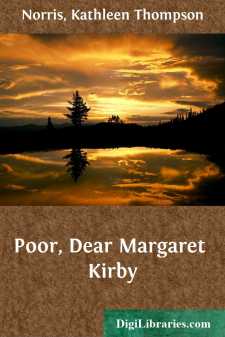 "You and I have been married nearly seven years," Margaret Kirby reflected bitterly, "and I suppose we are as near hating each other as two civilized people ever were!"

She did not say it aloud. The Kirbys had long ago given up any discussion of their attitude to each other. But as the thought came into her mind she eyed her husband—lounging moodily in her motor-car, as they swept home through the winter twilight—with hopeless, mutinous irritation.

What was the matter, she wondered, with John and Margaret Kirby—young, handsome, rich, and popular? What had been wrong with their marriage, that brilliantly heralded and widely advertised event? Whose fault was it that they two could not seem to understand each other, could not seem to live out their lives together in honorable and dignified companionship, as generations of their forebears had done?

"Perhaps everyone's marriage is more or less like ours," Margaret mused miserably. "Perhaps there's no such thing as a happy marriage."

Almost all the women that she knew admitted unhappiness of one sort or another, and discussed their domestic troubles freely. Margaret had never sunk to that; it would not even have been a relief to a nature as self-sufficient and as cold as hers. But for years she had felt that her marriage tie was an irksome and distasteful bond, and only that afternoon she had been stung by the bitter fact that the state of affairs between her husband and herself was no secret from their world. A certain audacious newspaper had boldly hinted that there would soon be a sensational separation in the Kirby household, whose beautiful mistress would undoubtedly follow her first unhappy marital experience with another—and, it was to be hoped, a more fortunate—marriage.

Margaret had laughed when the article was shown her, with the easy flippancy that is the stock in trade of her type of society woman; but the arrow had reached her very soul, nevertheless.

So it had come to that, had it? She and John had failed! They were to be dragged through the publicity, the humiliations, that precede the sundering of what God has joined together. They had drifted, as so many hundreds and thousands of men and women drift, from the warm, glorious companionship of the honeymoon, to quarrels, to truces, to discussion, to a recognition of their utter difference in point of view, and to this final independent, cool adjustment, that left their lives as utterly separated as if they had never met.

Yet she had done only what all the women she knew had done, Margaret reminded herself in self-justification. She had done it a little more brilliantly, perhaps; she had spent more money, worn handsomer jewels and gowns; she had succeeded in idling away her life in that utter leisure that was the ideal of them all, whether they were quite able to achieve it or not. Some women had to order their dinners, had occasionally to go about in hired vehicles, had to consider the cost of hats and gowns; but Margaret, the envied, had her own carriage and motor-car, her capable housekeeper, her yearly trip to Paris for uncounted frocks and hats....