Ponteach The Savages of America 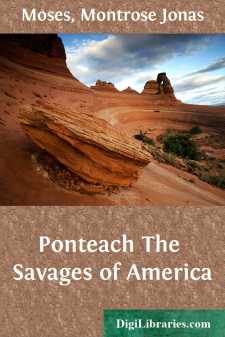 Robert Rogers, a soldier of fortune, is the Davy Crockett of Colonial times. Born at Dumbarton, New Hampshire, on November 17th (some authorities say 1730, another 1731, while the Dictionary of National Biography says 1727), he was the son of James Rogers, a farmer living in a frontier cabin at Methuen, in upper Massachusetts.

Robert's boyhood was spent in an atmosphere characteristic of pioneer life. He had scarcely passed his fifteenth year (Nevins claims in 1746), when he helped withstand an attack of Indians near his home, and this may be considered his first active experience with the Red Man. From this time on, the history of the career of Robert Rogers is the history of the efforts of the Colonists against the Indians as far west as Detroit, and as far south as South Carolina. The necessity which confronted all of the Colonists made of young Rogers one of the most expert hunters of the period, and in this connection he was associated with the famous John Stark, of Green Mountain Boys reputation. In the latter's Memoir, written by Caleb Stark, we have as graphic a pen-picture of Rogers, the hunter, at twenty-two, as we have actual likenesses of Rogers in the pictures of the time.

Evidently Rogers flourished financially at this period, for we find him buying land in Massachusetts in 1753. His activity as a soldier in the French and Indian War put him in command of a company, known as "Rogers' Rangers," and he participated in the Siege of Detroit against Pontiac and the French. This experience of his must have fired Rogers with the desire, after careful consideration of the condition of the Indian, to put his special plea for the cause of the Red Man in some permanent literary form, for "Ponteach" was published in 1766, after Rogers had left America, had gone to London, and thence had taken vessel for Algiers, where he fought under Dey.

By 1761, Rogers had so far advanced in worldly standing that he could afford to turn his attention to family affairs. We find him visiting Portsmouth, New Hampshire, where Elizabeth, daughter of the Reverend Arthur Browne, lived. The two were married on June 30th of that year; but evidently there was about Robert Rogers something his father-in-law did not quite relish. For, in 1763, a dispute arose between the two, because of Rogers' increasing dissipation. That they did not reach, however, any immediate open rupture, may have been due very largely to the fact that Rogers was becoming quite a land-owner in New York and New Hampshire. It was not until March 4, 1778, after Rogers had gone through many and varied experiences, not the least of which was serving a term in the Debtors' Prison in England, that his wife was granted, by the New Hampshire Legislature, a decree of divorce. She thereupon married Captain John Poach.

Naturally, most of the interest attached to Rogers is historical, not literary. His career in the French and Indian War, outlined by him in his "Journal of the French and Indian War," which was published in London in 1765; his activity in the Cherokee War in South Carolina; his association with William Bird, when he had an opportunity of studying the methods of Indian guides; his political ambitions when he returned to England in 1765—all of these are matters for the historian, and have received adequate consideration by Francis Parkman and other writers. During these activities, Rogers was not idle with his pen. He kept his Journals, and they clearly reveal how much of a ranger he was. After the fashion of the times, when he returned to England, anxious to let his friends know of the conditions in America, he not only published his Journals (1769), but also a concise account of North America (1770). But there must have been something about Rogers as a soldier of fortune that was not as straight or as honest as Davy Crockett. We find him, for example, entrusted with the post of Governor of Mackinac, and conducting affairs so illy that he was tried for treason. He may have advanced as a soldier through the successive ranks to Major, but it would seem that the higher up he advanced in position the more unscrupulous he became.

After serving his term in the Debtors' Prison, which began on June 14, 1773, he returned to America, at the beginning of the Revolution....