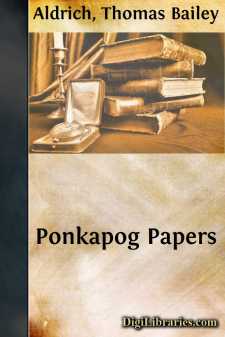 LEAVES FROM A NOTE BOOK

IN his Memoirs, Kropotkin states the singular fact that the natives of the Malayan Archipelago have an idea that something is extracted from them when their likenesses are taken by photography. Here is the motive for a fantastic short story, in which the hero—an author in vogue or a popular actor—might be depicted as having all his good qualities gradually photographed out of him. This could well be the result of too prolonged indulgence in the effort to "look natural." First the man loses his charming simplicity; then he begins to pose in intellectual attitudes, with finger on brow; then he becomes morbidly self-conscious, and finally ends in an asylum for incurable egotists. His death might be brought about by a cold caught in going out bareheaded, there being, for the moment, no hat in the market of sufficient circumference to meet his enlarged requirement.

THE evening we dropped anchor in the Bay of Yedo the moon was hanging directly over Yokohama. It was a mother-of-pearl moon, and might have been manufactured by any of the delicate artisans in the Hanchodori quarter. It impressed one as being a very good imitation, but nothing more. Nammikawa, the cloisonne-worker at Tokio, could have made a better moon.

I NOTICE the announcement of a new edition of "The Two First Centuries of Florentine Literature," by Professor Pasquale Villari. I am not acquainted with the work in question, but I trust that Professor Villari makes it plain to the reader how both centuries happened to be first.

THE walking delegates of a higher civilization, who have nothing to divide, look upon the notion of property as a purely artificial creation of human society. According to these advanced philosophers, the time will come when no man shall be allowed to call anything his. The beneficent law which takes away an author's rights in his own books just at the period when old age is creeping upon him seems to me a handsome stride toward the longed-for millennium.

SAVE US from our friends—our enemies we can guard against. The well-meaning rector of the little parish of Woodgates, England, and several of Robert Browning's local admirers have recently busied themselves in erecting a tablet to the memory of "the first known forefather of the poet." This lately turned up ancestor, who does not date very far back, was also named Robert Browning, and is described on the mural marble as "formerly footman and butler to Sir John Bankes of Corfe Castle." Now, Robert Browning the poet had as good right as Abou Ben Adhem himself to ask to be placed on the list of those who love their fellow men; but if the poet could have been consulted in the matter he probably would have preferred not to have that particular footman exhumed. However, it is an ill wind that blows nobody good. Sir John Bankes would scarcely have been heard of in our young century if it had not been for his footman. As Robert stood day by day, sleek and solemn, behind his master's chair in Corfe Castle, how little it entered into the head of Sir John that his highly respectable name would be served up to posterity—like a cold relish—by his own butler!...