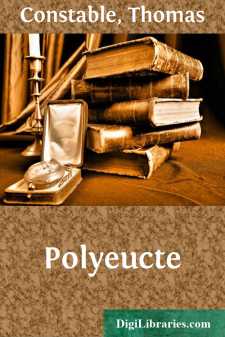 Pierre Corneille was born in Rouen in 1606, the son of an official; was educated by the Jesuits, and practised unsuccessfully as a lawyer. His dramatic career began with the comedy of "Melite," but it was by his "Medee" that he first proved his tragic genius. "The Cid" appeared in 1636, and a series of masterpieces followed—"Horace," "Cinna," "Polyeucte," "Le Menteur." After a failure in "Pertharite" he retired from the stage, deeply hurt by the disapproval of his audience. Six years later he resumed play writing with "OEdipe" and continued till 1674, producing in all some thirty plays. Though he earned a great reputation, he was poorly paid; and a proud and sensitive nature laid him open to considerable suffering. He died in 1684.

The works of Corneille represent most fully the ideal of French so-called "classical" tragedy. The laws to which this type of tragedy sought to conform were not so much truth to nature as the principles which the critics had derived from a somewhat inadequate interpretation of Aristotle and of the practise of the Greek tragedians. These principles concentrated the interest of the play upon a single central situation, in order to emphasize which, subordinate characters and complicating under-plots were avoided as much as possible. There was little or no action upon the stage, and the events of the plot were narrated by messengers, or by the main characters in conversation with confidantes. Further, the "dramatic unities" of time and place, as well as of action, were held to be binding.

One result of these rules was to give an extraordinary importance to the speeches; and it is in the eloquence of these, in the grandeur and dignity of the versification, and in the lofty moral elevation of the characters, that Corneille excels. All of these qualities are admirably exemplified in "Polyeucte"; and in the conduct of the leading personages one may perceive the most persistent trait of this dramatist's treatment of heroic character—the conquest of the passions by the reason and the will. "Among the masterpieces of Corneille," says Paul de Saint-Victor, "'Polyeucte' is assuredly the greatest; and nothing in all his dramas equals the extraordinary beauty of the character of 'Pauline.'"

The Scene is at Melitena, capital of Armenia. The action takes place in the Palace of Felix.

ACT I—POLYEUCTE. NEARCHUS NEARCHUS.Shall woman's dream of terror hurl the dart?Oh, feeble weapon 'gainst so great a heart!Must courage proved a thousand times in armsBow to a peril forged by vain alarms?POLY.I know that dreams are born to fade away,And melt in air before the light of day;I know that misty vapours of the nightDissolve and fly before the morning bright....
Show more
Show less