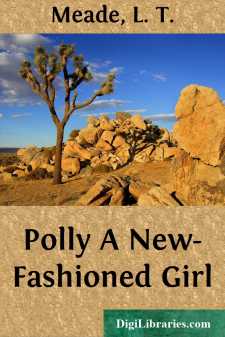 CHAPTER I. A GREAT MISFORTUNE.

It was an intensely hot July day—not a cloud appeared in the high blue vault of the sky; the trees, the flowers, the grasses, were all motionless, for not even the gentlest zephyr of a breeze was abroad; the whole world seemed lapped in a sort of drowsy, hot, languorous slumber. Even the flowers bowed their heads a little weariedly, and the birds after a time ceased singing, and got into the coolest and most shady parts of the great forest trees. There they sat and talked to one another of the glorious weather, for they liked the heat, although it made them too lazy to sing.

It was an open plain of country, and although there were clumps of trees here and there, great clumps with cool shade under them, there were also acres and acres of common land on which the sun beat remorselessly. This land was covered with heather, not yet in flower, and with bracken, which was already putting on its autumn glory of yellow and red. Neither the bracken nor the heather minded the July heat, but the butterflies thought it a trifle uncomfortable, and made for the clumps of trees, and looked longingly and regretfully at what had been a noisy, babbling little brook, but was now a dry and stony channel, deserted even by the dragon-flies.

At the other side of the brook was a hedge, composed principally of wild roses and hawthorn bushes, and beyond the hedge was a wide dyke, and at the top of the dyke a wire paling, and beyond that again, a good-sized vegetable garden.

From the tops of the trees, had any one been energetic enough to climb up there, or had any bird been sufficiently endowed with curiosity to glance his bright eyes in that direction, might have been seen smoke, ascending straight up into the air, and proceeding from the kitchen chimneys of a square-built gray house.

The house was nearly covered with creepers, and had a trellis porch, sheltering and protecting its open hall-door. Pigeons were cooing near, and several dogs were lying flat out in the shade which the wide eaves of the house afforded. There was a flower garden in front, and a wide gravel sweep, and a tennis court and croquet lawn, and a rose arbor, and even a great, wide, cool-looking tent. But as far as human life was concerned the whole place looked absolutely deserted. The pigeons cooed languidly, and the dogs yapped and yawned, and made ferocious snaps at audacious and troublesome flies. But no one handled the tennis bats, nor took up the croquet mallets; no one stopped to admire the roses, and no one entered the cool, inviting tent. The whole place might have been dead, as far as human life was concerned; and although the smoke did ascend straight up from the kitchen chimney, a vagrant or a tramp might have been tempted to enter the house by the open hall door, were it not protected by the lazy dogs.

Up, however, by the hedge, at the other side of the kitchen garden, could be heard just then the crackle of a bough, the rustle of a dress, and a short, smothered, impatient exclamation....