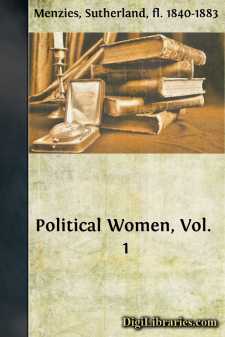 Add to My Favorites
Published: 8 years ago
Downloads: 45
Rating: (0 Votes)

In selecting the careers of certain celebrated women who have flung themselves with ardour into the vortex of politics, the author’s choice has not been so much an arbitrary one as it might seem, but rather guided by instances in which the adventurous game has not been restricted to the commonplace contentions of the public platform, or the private salon, but played on the grandest scale and on the most conspicuous arena; when Peace and War, crowns and dynasties, have trembled in the balance, and even the fate of a nation has been at stake.

The untoward results of the lives thus devoted—dazzling and heroic as some passages in their dramatic vicissitudes may appear—point the moral of the futility of such pursuit on the part of the gentler sex, and indicate the certainty of the penalty to be paid by those who by venturing into the fervid, exhausting struggle, and rashly courting exposure to the rough blows of the battle of political life, with its coarse and noisy passions, have discovered too late that the strife has done them irreparable injury. In the cases of those selected it will be seen that the fierce contention has commonly involved the sacrifice of conjugal happiness, the welfare of children, domestic peace, reputation, and all the amenities of the gentle life.

That clever women abound in the present day we have undeniable proof—many as clever, no doubt, as that famous philosopheress Madame du Chatelet, who managed at one and the same moment the thread of an intrigue, her cards at piquet, and a calculation in algebra, but who may still lack the qualifications indispensably necessary to make clever politicians. Perhaps, therefore, we might be allowed to suggest that it would be well for ladies who are ambitious of figuring in either or both spheres that politics and diplomacy are special and laborious pursuits, involving a great deal of knowledge as difficult, and in the first instance as repulsive, to acquire as Greek or chemistry. Yet, fully admitting their capacity to qualify themselves intellectually, and supposing them to attain the summit of their ambition of figuring successfully in public life, a grave question still arises—would they thereby increase or diminish their present great social influence? They have now more influence of a certain kind than men have; but if they obtain the influence of men, they cannot expect to retain the influence of women. Nature, it may be thought, has established a fair distribution of power between the two sexes. Women are potent in one sphere, and men in another; and, if they are conscious of the domestic sway they already exercise, they will not imperil it by challenging dominion in a field in which they would be less secure.

Root and bond of the family, woman is no less a stranger by her natural aptitudes than by her domestic ministrations to the general interests of society; the conduct of the latter demands, in fact, a disengagement of heart and mind to which she can only attain by transforming herself, to the detriment of her duties and of her true influence....