Political Thought in England from Locke to Bentham 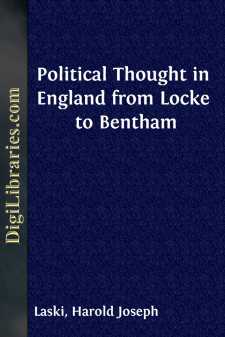 The eighteenth century may be said to begin with the Revolution of 1688; for, with its completion, the dogma of Divine Right disappeared for ever from English politics. Its place was but partially filled until Hume and Burke supplied the outlines of a new philosophy. For the observer of this age can hardly fail, as he notes its relative barrenness of abstract ideas, to be impressed by the large part Divine Right must have played in the politics of the succeeding century. Its very absoluteness made for keen partisanship on the one side and the other. It could produce at once the longwinded rhapsodies of Filmer and, by repulsion, the wearisome reiterations of Algernon Sidney. Once the foundations of Divine Right had been destroyed by Locke, the basis of passionate controversy was absent. The theory of a social contract never produced in England the enthusiasm it evoked in France, for the simple reason that the main objective of Rousseau and his disciples had already been secured there by other weapons. And this has perhaps given to the eighteenth century an urbaneness from which its predecessor was largely free. Sermons are perhaps the best test of such a change; and it is a relief to move from the addresses bristling with Suarez and Bellarmine to the noble exhortations of Bishop Butler. Not until the French Revolution were ultimate dogmas again called into question; and it is about them only that political speculation provokes deep feeling. The urbanity, indeed, is not entirely new. The Restoration had heralded its coming, and the tone of Halifax has more in common with Bolingbroke and Hume than with Hobbes and Filmer. Nor has the eighteenth century an historical profundity to compare with that of the zealous pamphleteers in the seventeenth. Heroic archivists like Prynne find very different substitutes in brilliant journalists like Defoe, and if Dalrymple and Blackstone are respectable, they bear no comparison with masters like Selden and Sir Henry Spelman.

Yet urbanity must not deceive us. The eighteenth century has an importance in English politics which the comparative absence of systematic speculation can not conceal. If its large constitutional outlines had been traced by a preceding age, its administrative detail had still to be secured. The process was very gradual; and the attempt of George III to arrest it produced the splendid effort of Edmund Burke. Locke's work may have been not seldom confused and stumbling; but it gave to the principle of consent a permanent place in English politics. It is the age which saw the crystallization of the party-system, and therein it may perhaps lay claim to have recognized what Bagehot called the vital principle of representative government. Few discussions of the sphere of government have been so productive as that in which Adam Smith gave a new basis to economic science. Few controversies have, despite its dullness, so carefully investigated the eternal problem of Church and State as that to which Hoadly's bishopric contributed its name....