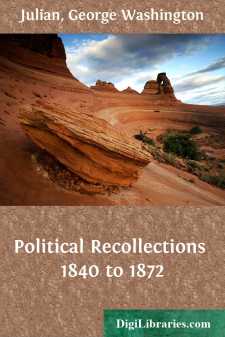 Through the influence of early associations, I began my political life as a Whig, casting my first presidential ballot for General Harrison, in 1840. I knew next to nothing of our party politics; but in the matter of attending mass-meetings, singing Whig songs and drinking hard cider, I played a considerable part in the memorable campaign of that year. So far as ideas entered into my support of the Whig candidate, I simply regarded him as a poor man, whose home was a log cabin, and who would in some way help the people through their scuffle with poverty and the "hard times"; while I was fully persuaded that Van Buren was not only a graceless aristocrat and a dandy, but a cunning conspirator, seeking the overthrow of his country's liberties by uniting the sword and the purse in his own clutches, as he was often painted on the party banners. In these impressions I was by no means singular. They filled the air, and seemed to be wafted on every breeze. Horace Greeley's famous campaign organ, "The Log Cabin," only gave them voice and fitting pictorial effect, and he frankly admitted in later years that his Whig appeals, with his music and wood engravings of General Harrison's battle scenes, were more "vivid" than "sedately argumentative." No one will now seriously pretend that this was a campaign of ideas, or a struggle for political reform in any sense. It was a grand national frolic, in which the imprisoned mirth and fun of the people found such jubilant and uproarious expression that anything like calmness of judgment or real seriousness of purpose was out of the question in the Whig camp.

As regards party issues, General Harrison, singularly enough, was not a Whig, but an old fashioned States-Rights Democrat of the Jeffersonian school. His letters to Harmar Denny and Sherrod Williams committed him to none of the dogmas which defined a Whig. No authentic utterance of his could be produced in which he had ever expressed his agreement with the Whig party on the questions of a protective tariff, internal improvements, or a national bank. There was very high Whig authority for saying that the bank question was not an issue of the canvass, while Van Buren's great measure for separating the currency from the banks became a law pending the Presidential struggle. In fact, it was because no proof of General Harrison's party orthodoxy could be found, that he was nominated; and the Whig managers of the Harrisburg Convention felt obliged to sacrifice Henry Clay, which they did through the basest double-dealing and treachery, for the reason that his right angled character as a party leader would make him unavailable as a candidate. As to John Tyler, he was not a Whig in any sense. It is true that he had opposed the removal of the deposits, and voted against Benton's expunging resolutions, but on all the regular and recognized party issues he was fully committed as a Democrat, and was, moreover, a nullifier. The sole proof of his Whiggery was the apocryphal statement that he wept when Clay failed to receive the nomination, while his political position was perfectly understood by the men who nominated him. There was one policy only on which they were perfectly agreed, and that was the policy of avowing no principles whatever; and they tendered but one issue, and that was a change of the national administration. On this issue they were perfectly united and thoroughly in earnest, and it was idle to deny that on their own showing the spoils alone divided them from the Democrats and inspired their zeal.

The demand of the Whigs for a change was well-founded. Samuel Swartwout, the New York Collector of Customs, had disgraced the Government by his defalcations; and, although he was a legacy of Mr. Van Buren's "illustrious predecessor," and had been "vindicated" by a Senate committee composed chiefly of his political opponents, he was unquestionably a public swindler, and had found shelter under Mr. Van Buren's administration. He was the most conspicuous public rascal of his time, but was far from being alone in his odious notoriety. The system of public plunder inaugurated by Jackson was in full blast, and an organized effort to reform it was the real need of the hour; but here was the weak point of the Whigs. They proceeded upon the perfectly gratuitous assumption that the shameless abuses against which they clamored would be thoroughly reformed should they come into power. They took it for granted that a change would be equivalent to a cure, and that the people would follow them in thus begging the very question on which some satisfactory assurance was reasonably required....