Poise: How to Attain It 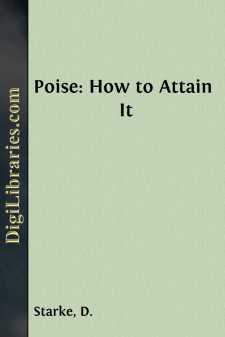 CHAPTER I THE NEED OF POISE IN LIFE

Lack of poise has always been an obstacle to those who are imbued with the desire to succeed.

In every age the awkwardness born of timidity has served to keep back those who suffered from it, but this defect has never been so great a drawback as in the life of to-day.

At this point let us attempt an exact definition of poise.

It is a quality which enables us to judge of our own value, and which, in revealing to us the knowledge of the things of which we are really capable, gives us at the same time the desire to accomplish them.

It is not a quality wholly simple. On the contrary, it is a composite of many others all of which take part in the molding of that totality which bears the name of poise.

It may be well to pass in review the principal qualities of which it is composed, that one may characterize as follows:

Knowledge of one's own value.

The power of resisting the appeals of self-love.

Pride that is free from vanity.

A definite and clearly conceived ambition.

Will, as is well known, is the pivot of all our resolutions, whether the question for the moment be how to form them or how to keep them when formed.

A man without will-power is a straw, blown about by every wind and carried, whether he will or no, into situations in which he has no valid reason for finding himself.

Without the will-power which enables us to take a firm hold of ourselves and to get a grip upon our impressions, they will remain vague and nebulous without presenting to us characters of sufficient definiteness to enable us to direct them readily into the proper channels.

It is will-power which gives us the force to maintain a resolution which will lead us to the hoped-for goal of success.

It is will-power also which enables us to correct the faults which stand in the way of the acquiring of poise.

We are not now speaking of those idle fancies which are no more than manifestations of nervousness. We have in mind rather that controlled and enduring purpose which arms the heart against the assaults of the emotions by giving it the strength to overcome them.

There are many cases even in which will-power has led to their entire suppression.

This happens more particularly in the case of those artificial emotions that the man of resolution ignores completely, but which cause agony to the timid who do not know how to escape them, and exaggerate them to excess.

This abnormal development of their personalities is the peculiarity of the timid, which their fitful efforts of will only heighten, alienating from them the sympathy which might be of assistance to them.

They take refuge in a species of mischievous and fruitless activity, leaving the field open to the development of all sorts of imaginary ills that argument does not serve to combat.

Their ego, whose importance is in no way counterbalanced by their appreciation of the friends they keep at a distance, fills their entire existence to such an extent that they have no doubt whatever that, when they are in public, every eye is, of necessity, fixt upon them.

Their negative will leaves them at the mercy of every sort of emotion, which, in arousing in them the necessity of a reaction they feel themselves powerless to realize, reduces them to a state of inferiority that, when it becomes known, is the source of grave embarrassment to them.

The power of will which sustains those who wish to acquire the habit of poise is, then, the capacity to accomplish acts solely because one has the ardent desire to achieve them.

We are now speaking, understand, neither of extreme heroism or of impossibilities.

Another point presents itself here. Willpower, in order to preserve its energy, must be sustained and fixt....