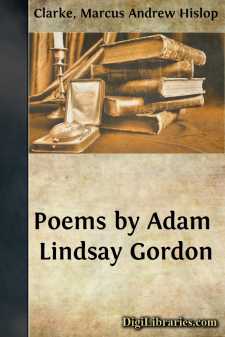 At rest! Hard by the margin of that seaWhose sounds are mingled with his noble verse,Now lies the shell that never more will houseThe fine, strong spirit of my gifted friend.Yea, he who flashed upon us suddenly,A shining soul with syllables of fire,Who sang the first great songs these lands can claimTo be their own; the one who did not seemTo know what royal place awaited himWithin the Temple of the Beautiful,Has passed away; and we who knew him, sitAghast in darkness, dumb with that great grief,Whose stature yet we cannot comprehend;While over yonder churchyard, hearsed with pines,The night-wind sings its immemorial hymn,And sobs above a newly-covered grave.The bard, the scholar, and the man who livedThat frank, that open-hearted life which keepsThe splendid fire of English chivalryFrom dying out; the one who never wrongedA fellow-man; the faithful friend who judgedThe many, anxious to be loved of him,By what he saw, and not by what he heard,As lesser spirits do; the brave great soulThat never told a lie, or turned asideTo fly from danger; he, I say, was oneOf that bright company this sin-stained worldCan ill afford to lose.They did not know,The hundreds who had read his sturdy verse,And revelled over ringing major notes,The mournful meaning of the undersongWhich runs through all he wrote, and often takesThe deep autumnal, half-prophetic toneOf forest winds in March; nor did they thinkThat on that healthy-hearted man there layThe wild specific curse which seems to clingFor ever to the Poet's twofold life!To Adam Lindsay Gordon, I who laidTwo years ago on Lionel Michael's graveA tender leaf of my regard; yea I,Who culled a garland from the flowers of songTo place where Harpur sleeps; I, left alone,The sad disciple of a shining bandNow gone! to Adam Lindsay Gordon's nameI dedicate these lines; and if 'tis trueThat, past the darkness of the grave, the soulBecomes omniscient, then the bard may stoopFrom his high seat to take the offering,And read it with a sigh for human friends,In human bonds, and gray with human griefs.And having wove and proffered this poor wreath,I stand to-day as lone as he who sawAt nightfall through the glimmering moony mists,The last of Arthur on the wailing mere,And strained in vain to hear the going voice.Henry Kendall. PREFACE.

The poems of Gordon have an interest beyond the mere personal one which his friends attach to his name. Written, as they were, at odd times and leisure moments of a stirring and adventurous life, it is not to be wondered at if they are unequal or unfinished. The astonishment of those who knew the man, and can gauge the capacity of this city to foster poetic instinct, is that such work was ever produced here at all. Intensely nervous, and feeling much of that shame at the exercise of the higher intelligence which besets those who are known to be renowned in field sports, Gordon produced his poems shyly, scribbled them on scraps of paper, and sent them anonymously to magazines....