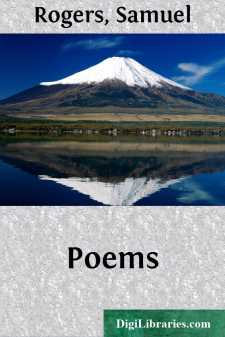 ANALYSIS OF THE FIRST PART.

THE Poem begins with the description of an obscure village, and of the pleasing melancholy which it excites on being revisited after a long absence. This mixed sensation is an effect of the Memory. From an effect we naturally ascend to the cause; and the subject proposed is then unfolded with an investigation of the nature and leading principles of this faculty.

It is evident that our ideas flow in continual succession, and introduce each other with a certain degree of regularity.

They are sometimes excited by sensible objects, and sometimes by an internal operation of the mind. Of the former species is most probably the memory of brutes; and its many sources of pleasure to them, as well as to us, are considered in the first part. The latter is the most perfect degree of memory, and forms the subject of the second.

When ideas have any relation whatever, they are attractive of each other in the mind; and the perception of any object naturally leads to the idea of another, which was connected with it either in time or place, or which can be compared or contrasted with it. Hence arises our attachment to inanimate objects; hence also, in some degree, the love of our country, and the emotion with which we contemplate the celebrated scenes of antiquity. Hence a picture directs our thoughts to the original: and, as cold and darkness suggest forcibly the ideas of heat and light, he, who feels the infirmities of age, dwells most on whatever reminds him of the vigour and vivacity of his youth.

The associating principle, as here employed, is no less conducive to virtue than to happiness; and, as such, it frequently discovers itself in the most tumultuous scenes of life. It addresses our finer feelings, and gives exercise to every mild and generous propensity.

Not confined to man, it extends through all animated nature; and its effects are peculiarly striking in the domestic tribes.

Twilight's soft dews steal o'er the village-green,With magic tints to harmonize the scene.Still'd is the hum that thro' the hamlet broke,When round the ruins of their antient oakThe peasants flock'd to hear the minstrel play,And games and carols clos'd the busy day.Her wheel at rest, the matron thrills no moreWith treasur'd tales, and legendary lore.All, all are fled; nor mirth nor music flowsTo chase the dreams of innocent repose.All, all are fled; yet still I linger here!What secret charms this silent spot endear?   Mark yon old Mansion frowning thro' the trees.Whose hollow turret wooes the whistling breeze.That casement, arch'd with ivy's brownest shade,First to these eyes the light of heav'n convey'd.The mouldering gateway strews the grass-grown court,Once the calm scene of many a simple sport;When nature pleas'd, for life itself was new,And the heart promis'd what the fancy drew.   See, thro' the fractur'd pediment reveal'd,Where moss inlays the rudely-sculptur'd shield,The martin's old, hereditary nest.Long may the ruin spare its hallow'd guest...!