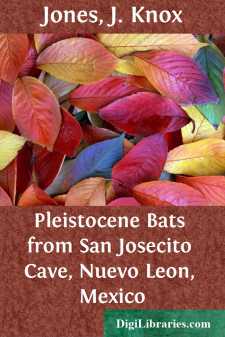 Some of the Pleistocene mammals from San Josecito Cave, near Aramberri, Nuevo León, México, collected by field parties of the California Institute of Technology under the direction of the late Professor Chester Stock, have been reported previously (see Furlong, 1943; Cushing, 1945; Stock, 1950; Hooper, 1952; Findley, 1953; Stock, 1953; Handley, 1955; Jackway, 1958). In 1950, Professor Stock loaned a portion of the San Josecito material to the University of Kansas for identification. Included therein were 89 crania and rami of bats, representing three families (Phyllostomidae, Desmodontidae and Vespertilionidae) and five genera, each represented by a single species. One of the species is here described as new. Three of the kinds are known only from the Pleistocene and two are Recent species.

The only previous mention of fossil bats from México known to me concerns material from San Josecito Cave. Cushing (1945:182) mentioned a "vampire bat" from the cave (see also Maldonado-Koerdell, 1948:17), and Handley (1955:48) based his description of Corynorhinus tetralophodon on a specimen from San Josecito.

Brief descriptions of the cave have been published by Miller (1943) and Stock (1943). The precise age of the deposits is unknown; stratification data did not accompany the material sent on loan to the University of Kansas. However, most of the micro-fauna is thought to have come from the higher levels in the cave and is probably late Pleistocene.

The San Josecito Cave collections are currently the property of the Los Angeles County Museum.

I am grateful to Dr. E. Raymond Hall for permission to study the bats from San Josecito Cave, to Dr. Robert W. Wilson for criticism of the manuscript, and to Mr. Philip Hershkovitz for permission to use comparative material at the Chicago Natural History Museum. Lucy Rempel made the drawings from photographs by John M. Legler.

Remarks.—The long-nosed bats from San Josecito Cave do not differ appreciably from Leptonycteris nivalis longala Stains, the largest Recent subspecies of the species, and the subspecies that occurs in the same geographic area today. Average and extremes of three cranial measurements of 22 specimens from San Josecito Cave, followed in parentheses by the average and extreme measurements of 23 adult L. n. longala from the type locality, 12 mi. S and 2 mi. E Arteaga, 7500 ft., Coahuila (after Stains, 1957: 356), are: Greatest length of skull, 28.2, 27.2-28.9 (27.5, 26.1-29.0); least interorbital constriction, 5.0, 4.8-5.4 (4.8, 4.1-5.4); breadth of braincase, 11.1, 10.6-11.6 (10.7, 10.1-11.2). The San Josecito specimens average larger than the series of Recent specimens in all of these measurements, especially breadth of braincase, but there is considerable overlap in each case and the extremes of greatest length of skull and of least interorbital constriction do not exceed the extremes in the Recent series.