Plain Facts for Old and Young 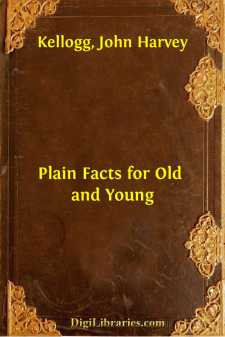 The publishers of this work offer no apology for presenting it to the reading public, since the wide prevalence of the evils which it exposes is sufficient warrant for its publication. The subjects with which it deals are of vital consequence to the human race; and it is of the utmost importance that every effort should be made to dispel the gross ignorance which almost universally prevails, by the wide diffusion, in a proper manner, of information of the character contained in this volume.

This book has been written not for the young only, nor for any single class of persons, but for all who are old enough to be capable of understanding and appreciating it. The prime object of its preparation has been to call attention to the great prevalence of sexual excesses of all kinds, and the heinous crimes resulting from some forms of sexual transgression, and to point out the terrible results which inevitably follow the violation of sexual law.

In order to make more clear and comprehensible the teachings of nature respecting the laws regulating the sexual function, and the evils resulting from their violation, it has seemed necessary to preface the practical part of the subject by a concise description of the anatomy of reproduction. In this portion of the work especial pains has been taken to avoid anything like indelicacy of expression, yet it has not been deemed advisable to sacrifice perspicuity of ideas to any prudish notions of modesty. It is hoped that the reader will bear in mind that the language of science is always chaste in itself, and that it is only through a corrupt imagination that it becomes invested with impurity. The author has constantly endeavored to impart information in the most straightforward, simple, and concise manner.

The work should be judiciously circulated, and to secure this the publishers will take care to place it in the hands of agents competent to introduce it with discretion; yet it may be read without injury by any one who is sufficiently mature to understand it. Great care has been taken to exclude from its pages those accounts of the habits of vicious persons, and descriptions of the mechanical accessories of vice, with which many works upon sexual subjects abound.

The first editions of the work were issued with no little anxiety on the part of both author and publishers as to how it would be received by the reading public. It was anticipated that no little adverse criticism, and perhaps severe condemnation, would be pronounced by many whose education and general mode of thought had been such as to unfit them to appreciate it; but it was hoped that persons of more thoughtful and unbiased minds would receive the work kindly, and would readily co-operate with the publishers in its circulation. This anticipation has been more than realized. Wherever the book has been introduced, it has met with a warm reception; and of the several thousand persons into whose hands the work has been placed, hundreds have gratefully acknowledged the benefit which they have received from its perusal, and it is hoped that a large proportion have been greatly benefited....