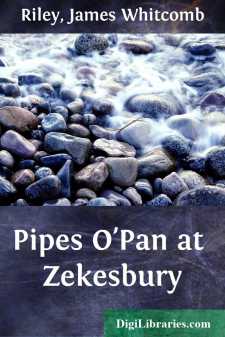 The pipes of Pan! Not idler now are they  Than when their cunning fashioner first blew  The pith of music from them: Yet for you  And me their notes are blown in many a way  Lost in our murmurings for that old day  That fared so well, without us.—Waken to  The pipings here at hand:—The clear halloo  Of truant-voices, and the roundelay  The waters warble in the solitude  Of blooming thickets, where the robin's breast  Sends up such ecstacy o'er dale and dell,  Each tree top answers, till in all the wood  There lingers not one squirrel in his nest  Whetting his hunger on an empty shell.

The little town, as I recall it, was of just enough dignity and dearth of the same to be an ordinary county seat in Indiana—"The Grand Old Hoosier State," as it was used to being howlingly referred to by the forensic stump orator from the old stand in the courthouse yard—a political campaign being the wildest delight that Zekesbury might ever hope to call its own.

Through years the fitful happenings of the town and its vicinity went on the same—the same! Annually about one circus ventured in, and vanished, and was gone, even as a passing trumpet-blast; the usual rainy-season swelled the "Crick," the driftage choking at "the covered bridge," and backing water till the old road looked amphibious; and crowds of curious townsfolk straggled down to look upon the watery wonder, and lean awe-struck above it, and spit in it, and turn mutely home again.

The usual formula of incidents peculiar to an uneventful town and its vicinity: The countryman from "Jessup's Crossing," with the cornstalk coffin-measure, loped into town, his steaming little gray-and-red-flecked "roadster" gurgitating, as it were, with that mysterious utterance that ever has commanded and ever must evoke the wonder and bewilderment of every boy. The small-pox rumor became prevalent betimes, and the subtle aroma of the assafoetida-bag permeated the graded schools "from turret to foundation-stone;" the still recurring exposé of the poor-house management; the farm-hand, with the scythe across his shoulder, struck dead by lightning; the long-drawn quarrel between the rival editors culminating in one of them assaulting the other with a "sidestick," and the other kicking the one down stairs and thenceward ad libitum; the tramp, suppositiously stealing a ride, found dead on the railroad; the grand jury returning a sensational indictment against a bar-tender non est; the Temperance outbreak; the "Revival;" the Church Festival; and the "Free Lectures on Phrenology, and Marvels of Mesmerism," at the town hall. It was during the time of the last-mentioned sensation, and directly through this scientific investigation, that I came upon two of the town's most remarkable characters. And however meager my outline of them may prove, my material for the sketch is most accurate in every detail, and no deviation from the cold facts of the case shall influence any line of my report....