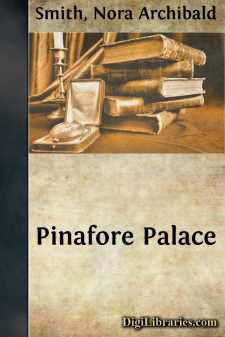 TO THE MOTHER "A Court as of angels,A public not to be bribed,Not to be entreated,Not to be overawed."

Such is the audience—in long clothes or short frocks, in pinafores or kilts, or in the brief trousers that bespeak the budding man—such is the crowing, laughing court, the toddling public that awaits these verses.

Every home, large or small, poor or rich, that has a child in it, is a Pinafore Palace, and we have borrowed the phrase from one of childhood's most whimsical and devoted poets-laureate, thinking no other words would so well express our meaning.

If the two main divisions of the book—"The Royal Baby" and "Little Prince and Princess"—should seem to you a trifle sentimental it will be because you forget for the moment the gayety and humor of the title with its delightful assumptions of regal dignity and state. Granted the Palace itself, everything else falls easily into line, and if you cannot readily concede the royal birth and bearing of your neighbor's child you will see nothing strange in thinking of your own nursling as little prince or princess, and so you will be able to accept gracefully the sobriquet of Queen Mother, which is yours by the same invincible logic!

Oh, yes, we allow that instead of being gravely editorial in our attitude, we have played with the title, as well as with all the sub-titles and classifications, feeling that it was the next pleasantest thing to playing with the babies themselves. It was so delightful to re-read the well-loved rhymes of our own childhood and try to find others worthy to put beside them; so delicious to imagine the hundreds of young mothers who would meet their old favorites in these particular pages; and so inspiring to think of the thousands of new babies whose first hearing of nursery classics would be associated with this red-covered volume, that we found ourselves in a joyous mood which we hope will be contagious. Nothing is surer than that a certain gayety of heart and mind constitute the most wholesome climate for young children. "The baby whose mother has not charmed him in his cradle with rhyme and song has no enchanting dreams; he is not gay and he will never be a great musician," so runs the old Swiss saying.

Youthful mothers, beautifully and properly serious about their strange new duties and responsibilities, need not fear that Mother Goose is anything but healthful nonsense. She holds a place all her own, and the years that have rolled over her head (some of the rhymes going back to the sixteenth century) only give her a firmer footing among the immortals. There are no real substitutes for her unique rhymes, neither can they be added to nor imitated; for the world nowadays is seemingly too sophisticated to frame just this sort of merry, light-hearted, irresponsible verse which has mellowed with the years. "These ancient rhymes," says Andrew Lang, "are smooth stones from the brook of time, worn round by constant friction of tongues long silent."

Nor is your use of this "light literature of the infant scholar" in the nursery without purpose or value....