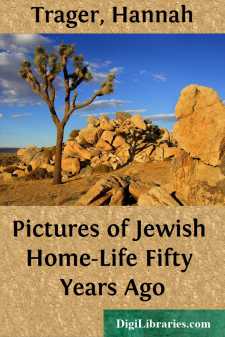 THE ARRIVAL IN JERUSALEM

On a Friday afternoon everyone was very busy in Benjamin's home washing and dressing to go to Shule. The mother was getting the living-room clean and tidy for the Sabbath.

The family lived in a few rooms off Commercial Road, in one of the many back streets. The underground kitchen had to be used as the dining-and sitting-room, for they had not been many years in England and it was a hard struggle for Benjamin's parents to make ends meet and provide for a large family.

The father and the elder boys were dressing as best they could in this room. Just then the mother came in, very excited, and said to her husband: "What will you say to this? I gave Benjamin his Sabbath clothes and a clean tsitsith, and what do you think he did?"

"What?" asked the father, and stopped brushing his clothes.

"Why, he took the tsitsith and threw it on the floor, and said he would never wear it again. I punished him, and told him to put it on again. So you had better go to him and give him what he deserves."

"You are rather hasty, my dear wife," said the father; "for, before punishing him, you should have asked him why he did such a thing."

"What!" exclaimed the mother, "do you think I have nothing else to do but to stand and argue with him just before Sabbath, when I have so much work? You are far too easy-going, Jacob—you should really be firmer with the children."

"No, no!" said Jacob, who was a kindly man and understood human nature better than his hasty, but well-meaning and loving, wife. The struggle and constant hard work in keeping the home of a large family was telling upon her, and any disobedience in the children irritated her very much.

"We must not be hasty with the children," continued Jacob, "especially now-a-days, for they live under different circumstances from those we knew when we were young. Instead of hastily scolding and punishing them, let us rather quietly reason with them, when possible, and show them where they are wrong."

"Perhaps you may be right," said Benjamin's mother; "so let us leave the matter till you return from Shule and have had our Sabbath meal—then you can quietly ask Benjamin why he acted as he did."

Benjamin was like many other boys of 13, not very clever, but blessed with a good deal of common sense. His great ambition was to become a teacher, and so he worked steadily at his lessons. His reason for wishing to be a teacher was that he wanted to rule and to punish boys as his master did. Whenever he had a caning from his headmaster he always consoled himself with the thought that his turn would come some day—when he was a teacher—to do the same to other boys.

When they returned from Shule and nothing was said, even at the evening meal, about the way Benjamin had annoyed his mother, he was rather surprised. His mother, during the time they were at Shule, had made the living-room, which was really the kitchen, look so clean and bright with the five lighted candles placed on the snow-white table-cloth, and the old stove so well polished, that it almost looked as bright as a looking glass. What interested the young ones most was the saucepan which stood on one side of the stove waiting for its contents to be put on the table, and, oh, how they enjoyed the sweet savour which came from it!

They all gathered round the table to welcome the Princess Sabbath. The father made kiddush, and the wine cup was handed round to all....