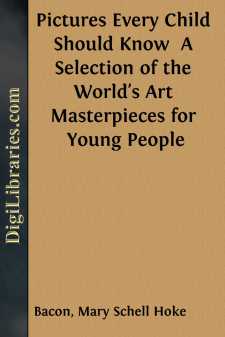 Man's inclination to decorate his belongings has always been one of the earliest signs of civilisation. Art had its beginning in the lines indented in clay, perhaps, or hollowed in the wood of family utensils; after that came crude colouring and drawing.

Among the first serious efforts to draw were the Egyptian square and pointed things, animals and men. The most that artists of that day succeeded in doing was to preserve the fashions of the time. Their drawings tell us that men wore their beards in bags. They show us, also, many peculiar head-dresses and strange agricultural implements. Artists of that day put down what they saw, and they saw with an untrained eye and made the record with an untrained hand; but they did not put in false details for the sake of glorifying the subject. One can distinguish a man from a mountain in their work, but the arms and legs embroidered upon Mathilde's tapestry, or the figures representing family history on an Oriental rug, are quite as correct in drawing and as little of a puzzle. As men became more intelligent, hence spiritualised, they began to express themselves in ideal ways; to glorify the commonplace; and thus they passed from Egyptian geometry to gracious lines and beautiful colouring.

Indian pottery was the first development of art in America and it led to the working of metals, followed by drawing and portraiture. Among the Americans, as soon as that term ceased to mean Indians, art took a most distracting turn. Europe was old in pictures, great and beautiful, when America was worshipping at the shrine of the chromo; but the chromo served a good turn, bad as it was. It was a link between the black and white of the admirable wood-cut and the true colour picture.

Some of the Colonists brought over here the portraits of their ancestors, but those paintings could not be considered "American" art, nor were those early settlers Americans; but the generation that followed gave to the world Benjamin West. He left his Mother Country for England, where he found a knighthood and honours of every kind awaiting him.

The earliest artists of America had to go away to do their work, because there was no place here for any men but those engaged in clearing land, planting corn, and fighting Indians. Sir Benjamin West was President of the Royal Academy while America was still revelling in chromos. The artists who remained chose such objects as Davy Crockett in the trackless forest, or made pictures of the Continental Congress.

After the chromo in America came the picture known as the "buckeye," painted by relays of artists. Great canvases were stretched and blocked off into lengths. The scene was drawn in by one man, who was followed by "artists," each in turn painting sky, water, foliage, figures, according to his specialty. Thus whole yards of canvas could be painted in a day, with more artists to the square inch than are now employed to paint advertisements on a barn.

The Centennial Exhibition of 1876 came as a glorious flashlight....