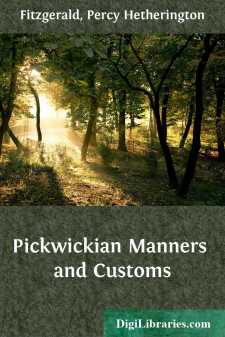 No English book has so materially increased the general gaiety of the country, or inspired the feeling of comedy to such a degree as, “The Pickwick Club.”  It is now some “sixty years since” this book was published, and it is still heartily appreciated.  What English novel or story is there which is made the subject of notes and commentaries on the most elaborate scale; whose very misprints and inconsistencies are counted up; whose earliest “states of the plates” are sought out and esteemed precious?  “Pickwick,” wonderful to say, is the only story that has produced a literature of its own—quite a little library—and has kept artists, topographers, antiquaries, and collectors all busily at work.

There seems to be some mystery, almost miracle, here.  A young fellow of four-and-twenty throws off, or rather “rattles off,” in the exuberance of his spirits, a never-flagging series of incidents and characters.  The story is read, devoured, absorbed, all over the world, and now, sixty years after its appearance, new and yet newer editions are being issued.  All the places alluded to and described in the book have in their turn been lifted into fame, and there are constantly appearing in magazines illustrated articles on “Rochester and Dickens,” “Dickens Land,” “Dickens’ London,” and the rest.  Wonderful!  People, indeed, seem never to tire of the subject—the same topics are taken up over and over again.  The secret seems to be that the book was a living thing, and still lives.  It is, moreover, perhaps the best, most accurate picture of character and manners that are quite gone by: in it the meaning and significance of old buildings, old inns, old churches, and old towns are reached, and interpreted in most interesting fashion; the humour, bubbling over, and never forced, and always fresh, is sustained through some six hundred closely-printed pages; all which, in itself, is a marvel and unapproached.  It is easy, however, to talk of the boisterousness, the “caricature,” the unlicensed recklessness of the book, the lack of restraint, the defiance of the probabilities.  It is popular and acceptable all the same.  But there is one test which incontestably proves its merit, and supplies its title, to be considered all but “monumental.”  This is its prodigious fertility and suggestiveness.

At this moment a review is being made of the long Victorian Age, and people are reckoning up the wonderful changes in life and manners that have taken place within the past sixty years.  These have been so imperceptibly made that they are likely to escape our ken, and the eye chiefly settles on some few of the more striking and monumental kind, such as the introduction of railways, of ocean steamships, electricity, and the like.  But no standard of comparison could be more useful or more compendious than the immortal chronicle of Pickwick, in which the old life, not forgotten by some of us, is summarised with the completeness of a history.  The reign of Pickwick, like that of the sovereign, began some sixty years ago.  Let us recall some of these changes.

To begin: We have now no arrest for debt, with the attendant sponging-houses, Cursitor Street, sheriffs’ officers, and bailiffs; and no great Fleet Prison, Marshalsea, or King’s Bench for imprisoning debtors.  There are no polling days and hustings, with riotous proceedings, or “hocussing” of voters; and no bribery on a splendid scale.

Drinking and drunkenness in society have quite gone out of fashion.  Gentlemen at a country house rarely or never come up from dinner, or return from a cricket match, in an almost “beastly” state of intoxication; and “cold punch” is not very constantly drunk through the day.  There are no elopements now in chaises and four, like Miss Wardle’s, with headlong pursuit in other chaises and four; nor are special licenses issued at a moment’s notice to help clandestine marriages.  There is now no frequenting of taverns and “free and easies” by gentlemen, at the “Magpie and Stump” and such places, nor do persons of means take up their residence at houses like the “George and Vulture” in the City.  No galleried inns (though one still lingers on in Holborn), are there, at which travellers put up: there were then nearly a dozen, in the Borough and elsewhere.  There are no coaches on the great roads, no guards and bulky drivers; no gigs with hoods, called “cabs,” with the driver’s seat next his fare; no “hackney coaches,” no “Hampstead stages,” no “Stanhopes” or “guillotined cabriolets”—whatever they were—or “mail-carts,” the “pwettiest thing” driven by gentlemen.  And there are no “sedan chairs” to take Mrs....