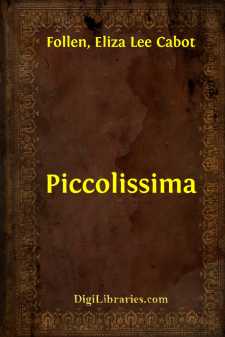 This little story I have translated from the French of Mademoiselle Montgolfier. If children enjoy it as much as I have, and think it as pretty, they will not regret that I have preferred it to any thing I could write for them.

Mademoiselle Montgolfier says in her preface to the little book, "Notwithstanding the fanciful character of this story, it is, in fact, simply a little lesson in Natural History," and that "she would engage for the truth of all that Piccolissima relates of the manners and customs of the insects with whom she makes acquaintance."

It may also interest our young, and, perhaps, our more advanced readers, to know, that Mademoiselle Montgolfier is the daughter of the celebrated Montgolfier who invented balloons, and made the first ascension. I had, when in France, the pleasure of seeing this very interesting lady, and know her affection for children; and I am sure that it will please her to know that her tiny naturalist is welcomed by the American children. I therefore feel a particular pleasure in introducing the wonderfully small Piccolissima to their acquaintance, and recommending her to their affectionate regard.

Piccolissima was descended on the father's side from the famous Tom Thumb, so well known to all children. On the mother's side, her lineage was no less distinguished. Mignonette Littlepin (this was the family name of Madam Tom Thumb) was the great granddaughter of the wonderful Princess, who once lodged in a spectacle case, out of which she came so splendidly attired that the brilliancy of her little person illuminated all surrounding objects. A trustworthy biographer tells us that nothing occurred in the history of Mr. and Mrs. Tom Thumb to disgrace their illustrious parentage, and they were considered none the less good citizens because they were rather smaller than other people.

In the mean while, however, our humble couple became suddenly celebrated by the birth of our heroine; this small creature was so delicate, so exquisite, so pretty, and so lively and full of spirit, that from the age of two years she became the object of general admiration. She was not more than one inch in height, and her mother, who had prepared the cradle and baby linen for a child of the usual size, was puzzled to know what to do. Finally, the half of a cocoanut shell, lined, and furnished with soft cushions of thistle down, made a good bed for the little wonder; and the nursery maid, wife of a neighboring clockmaker, and a person of ingenuity, conceived the admirable idea of suspending the cocoanut cradle from the pendulum of a great clock, in order that the infant might be rocked all the time. Madam Tom Thumb was enchanted with the invention. She adhered to the old-fashioned notions, and could not suppose it possible that her little one could sleep without rocking. What the good little mother found the most trouble from, in the extreme smallness and delicacy of the limbs of her new-born doll baby, was the impossibility of swathing and dressing it. So she was forced to resign herself to doing as the birds do, and bring up her little one on a bed of moss and down. She hardly dared to put upon the little arm, smaller than her own little finger, a little shift made of the fine white skin of the inside of an eggshell....