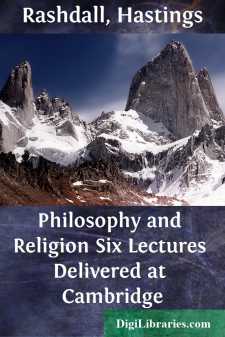 GENERAL INTRODUCTION TO THE SERIES

Man has no deeper or wider interest than theology; none deeper, for however much he may change, he never loses his love of the many questions it covers; and none wider, for under whatever law he may live he never escapes from its spacious shade; nor does he ever find that it speaks to him in vain or uses a voice that fails to reach him. Once the present writer was talking with a friend who has equal fame as a statesman and a man of letters, and he said, 'Every day I live, Politics, which are affairs of Man and Time, interest me less, while Theology, which is an affair of God and Eternity, interests me more.' As with him, so with many, though the many feel that their interest is in theology and not in dogma. Dogma, they know, is but a series of resolutions framed by a council or parliament, which they do not respect any the more because the parliament was composed of ecclesiastically-minded persons; while the theology which so interests them is a discourse touching God, though the Being so named is the God man conceived as not only related to himself and his world but also as rising ever higher with the notions of the self and the world. Wise books, not in dogma but in theology, may therefore be described as the supreme {vi} need of our day, for only such can save us from much fanaticism and secure us in the full possession of a sober and sane reason.

Theology is less a single science than an encyclopaedia of sciences; indeed all the sciences which have to do with man have a better right to be called theological than anthropological, though the man it studies is not simply an individual but a race. Its way of viewing man is indeed characteristic; from this have come some of its brighter ideals and some of its darkest dreams. The ideals are all either ethical or social, and would make of earth a heaven, creating fraternity amongst men and forming all states into a goodly sisterhood; the dreams may be represented by doctrines which concern sin on the one side and the will of God on the other. But even this will cannot make sin luminous, for were it made radiant with grace, it would cease to be sin.

These books then,—which have all to be written by men who have lived in the full blaze of modern light,—though without having either their eyes burned out or their souls scorched into insensibility,—are intended to present God in relation to Man and Man in relation to God. It is intended that they begin, not in date of publication, but in order of thought, with a Theological Encyclopaedia which shall show the circle of sciences co-ordinated under the term Theology, though all will be viewed as related to its central or main idea. This relation of God to human knowledge will then be looked at through mind as a communion of Deity with humanity, or God in fellowship {vii} with concrete man. On this basis the idea of Revelation will be dealt with. Then, so far as history and philology are concerned, the two Sacred Books, which are here most significant, will be viewed as the scholar, who is also a divine, views them; in other words, the Old and New Testaments, regarded as human documents, will be criticised as a literature which expresses relations to both the present and the future; that is, to the men and races who made the books, as well as to the races and men the books made....