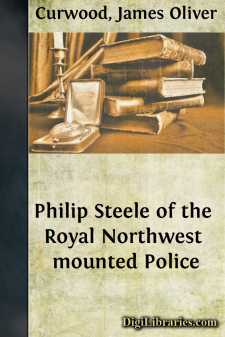 Chapter I. The Hyacinth Letter

Philip Steele's pencil drove steadily over the paper, as if the mere writing of a letter he might never mail in some way lessened the loneliness.

The wind is blowing a furious gale outside. From off the lake come volleys of sleet, like shot from guns, and all the wild demons of this black night in the wilderness seem bent on tearing apart the huge end-locked logs that form my cabin home. In truth, it is a terrible night to be afar from human companionship, with naught but this roaring desolation about and the air above filled with screeching terrors. Even through thick log walls I can hear the surf roaring among the rocks and beating the white driftwood like a thousand battering-rams, almost at my door. It is a night to make one shiver, and in the lulls of the storm the tall pines above me whistle and wail mournfully as they straighten their twisted heads after the blasts.

To-morrow this will be a desolation of snow. There will be snow from here to Hudson's Bay, from the Bay to the Arctic, and where now there is all this fury and strife of wind and sleet there will be unending quiet—the stillness which breeds our tongueless people of the North. But this is small comfort for tonight. Yesterday I caught a little mouse in my flour and killed him. I am sorry now, for surely all this trouble and thunder in the night would have driven him out from his home in the wall to keep me company.

It would not be so bad if it were not for the skull. Three times in the last half-hour I have started to take it down from its shelf over my crude stone fireplace, where pine logs are blazing. But each time I have fallen back, shivering, into the bed-like chair I have made for myself out of saplings and caribou skin. It is a human skull. Only a short time ago it was a living man, with a voice, and eyes, and brain—and that is what makes me uncomfortable. If it were an old skull, it would be different. But it is a new skull. Almost I fancy at times that there is life lurking in the eyeless sockets, where the red firelight from the pitch-weighted logs plays in grewsome flashes; and I fancy, too, that in the brainless cavities of the skull there must still be some of the old passion, stirred into spirit life by the very madness of this night. A hundred times I have been sorry that I kept the thing, but never more so than now.

How the wind howls and the pines screech above me! A pailful of snow, plunging down my chimney, sends the chills up my spine as if it were the very devil himself, and the steam of it surges out and upward and hides the skull. It is absurd to go to bed, to make an effort to sleep, for I know what my dreams would be. To-night they would be filled with this skull—and with visions of a face, a woman's face—

Thus far had Steele written, when with a nervous laugh he sprang from his chair, and with something that sounded very near to an oath, in the wild tumult of the storm, crumpled the paper in his hand and flung it among the blazing logs he had described but a few moments before....