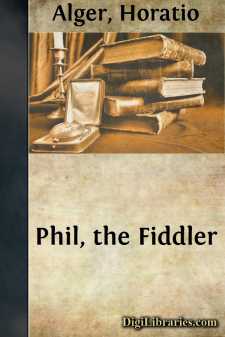 CHAPTER I PHIL THE FIDDLER

"Viva Garibaldi!" sang a young Italian boy in an uptown street, accompanying himself on a violin which, from its battered appearance, seemed to have met with hard usage.

As the young singer is to be the hero of my story, I will pause to describe him. He was twelve years old, but small of his age. His complexion was a brilliant olive, with the dark eyes peculiar to his race, and his hair black. In spite of the dirt, his face was strikingly handsome, especially when lighted up by a smile, as was often the case, for in spite of the hardships of his lot, and these were neither few nor light, Filippo was naturally merry and light-hearted.

He wore a velveteen jacket, and pantaloons which atoned, by their extra length, for the holes resulting from hard usage and antiquity. His shoes, which appeared to be wholly unacquainted with blacking, were, like his pantaloons, two or three sizes too large for him, making it necessary for him to shuffle along ungracefully.

It was now ten o'clock in the morning. Two hours had elapsed since Filippo, or Phil, as I shall call him, for the benefit of my readers unfamiliar with Italian names, had left the miserable home in Crosby Street, where he and forty other boys lived in charge of a middle-aged Italian, known as the padrone. Of this person, and the relations between him and the boys, I shall hereafter speak. At present I propose to accompany Phil.

Though he had wandered about, singing and playing, for two hours, Phil had not yet received a penny. This made him somewhat uneasy, for he knew that at night he must carry home a satisfactory sum to the padrone, or he would be brutally beaten; and poor Phil knew from sad experience that this hard taskmaster had no mercy in such cases.

The block in which he stood was adjacent to Fifth Avenue, and was lined on either side with brown-stone houses. It was quiet, and but few passed through it during the busy hours of the day. But Phil's hope was that some money might be thrown him from a window of some of the fine houses before which he played, but he seemed likely to be disappointed, for he played ten minutes without apparently attracting any attention. He was about to change his position, when the basement door of one of the houses opened, and a servant came out, bareheaded, and approached him. Phil regarded her with distrust, for he was often ordered away as a nuisance. He stopped playing, and, hugging his violin closely, regarded her watchfully.

"You're to come in," said the girl abruptly.

"I don't understand your Italian rubbish," said the girl. "You're to come into the house."

In general, boys of Phil's class are slow in learning English. After months, and even years sometimes, their knowledge is limited to a few words or phrases. On the other hand, they pick up French readily, and as many of them, en route for America, spend some weeks, or months, in the French metropolis, it is common to find them able to speak the language somewhat....