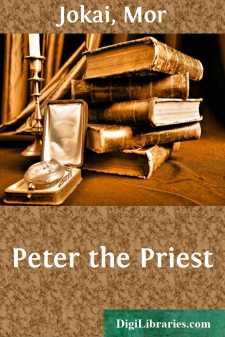 CHAPTER I. IN THE MONASTERY.

There were six of them besides the Prior and Abbot. The seventh was away in the village, collecting the gifts of charity.

"Benedicite," began the Prior. "Here is a message from our most gracious patroness." With that he laid upon the table a sealed letter in Latin, which the others passed from hand to hand. All understood it, but it was evident that not one of them liked the letter, for they turned up their noses, pursed their lips and knit their eyebrows.

"One of us is bidden to the court of our most munificent patroness to educate her only son."

"He is a little devil!" exclaimed the Abbot.

"He talks and whistles in church," cried another.

"He reviles the saints and the souls of the departed."

"He torments animals." Each one had something to say; especially the last.

"He is the accursed child of a mad mother."

"She is the destruction of all men," continued the Abbot. "She sins against all the commandments."

"She tramples under foot all the sacraments."

"She is a raging fury and a sacrilegious witch."

"She sent her husband to his grave with a deadly drink."

The Prior met all these horrible comments with a stoical calm. "Still she is our gracious patroness, and her son also will one day be our patron. We must drink the bitter cup to its dregs. Let us choose."

Still all shook their heads.

"I have the fever in my bones," said one, rubbing his leg.

"I have trouble with my liver," said another, and as proof he put out his tongue to the opposite brother, who hastened to say:

"It is my vocation to heal the sick."

Now all three looked at the fourth, who felt very confident of having the best excuse:

"And I am not acquainted with the Scythian speech, neither the Hungarian nor the Slavic."

The fifth was embarrassed what excuse to give:

"I have taken a vow never to speak to a woman."

Evidently no one cared for the office.

"Then let us send Peter," said the Prior calmly.

At this all five cried out: "He is too young," said one.

"But he is stern of character," replied the Prior.

"He will meet with very great temptations," threw in a second.

"The greater will be his triumph," returned the Prior.

"But he is still only a brother," a third protested.

"We can make him a father," the Prior answered. An answer which brought them all to their feet, opposing it loudly:

"Then let some one else go," said the Prior coldly.

Silence fell upon the group: they shrugged their shoulders, fell back into their large richly carved arm-chairs, and murmured:

"Then let Peter be made father, and let father Peter go."

It was the student John's week in the bake-house, and from there he had heard every word; and now that the worthy fathers had gone away, he came out of the bake-house and hobbled off to the kitchen. The master of the kitchen was not there, but Samuel, a fellow-student, hung over the edge of a large two-handled tub. John was lank, and Samuel was thickset; both were in rags, out of respect to the golden saying, "In rags is a student at his best." It was the daily duty of these two students to carry to the pigs this large tub full of kitchen refuse....