Peter the Hermit A Tale of Enthusiasm

by Daniel A. (Daniel Ayres) Goodsell 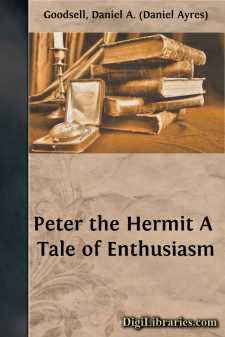 The great movements called the Crusades followed the leading of universal religious instincts.

The Cause of Pilgrimages Belong to all Religions The Impulse of To-day. Pilgrimages and Historic Memory

Wherever a great leader has been born, has taught, has suffered, died, or been buried, the feet of his followers have been glad to stand. At such spots religious emotions are revived, holy influences are believed to be absorbed, and a sense of nearness to the prophets of God acquired. Whatever the teacher wore, used, or even looked upon, became a treasure through its relation to him. In India pilgrimages to holy shrines, rivers, and cities have been works of merit, even from prehistoric times. The same is true of China as to temples, tombs, springs, and mountain summits. Devotees of later religions, like that of Mahomet, have their Meccas, as the Roman Church has her Loretto and her Lourdes. The murder of Thomas á Becket was followed by the Canterbury pilgrimages, immortalized by Chaucer. "From the lowest Fetichism up to Christianity itself this general and unconquerable propensity has either been sanctioned by religion or sprung up out of it." Humanity leans more readily on the Incarnate Savior than on Him who was "before the world was." To-day the devout Christian feels the impulse to walk where the Master walked, to behold the sea which He stilled, to sit by the well where He preached, to pray in the garden of His agony, and to stand on the summit above which He shone. And if his faith can be assured as to the site of Calvary, the great tragedy loses all historical dimness and is made real, visible, and present, though its story be read through penitent tears. The place suggests the man; the man suggests the Divine Man; He seems nearer when we worship where an apostle said, "My Lord and my God."

The East the Fountain of Religions Influence of Magna Græcia

The East has always been the fountain of religions to the European mind. To the westward flowed the stream of doctrines which sprang up in the Orient. We are beginning to see that Greece came to many of her gods through instruction from the Asiatic continent, and that her originality in religion lay chiefly in her refinement of nature worship and in the beautiful marble forms in which Greek genius enshrined her divinities. From Greece the stream reached Italy in Magna Græcia, and later by the adoption through Roman assimilation of the gods of the Greek Pantheon. The worship of Isis and Osiris came from Egypt to Rome, and became an influential cult there, as witness the abounding symbols of that worship still preserved in the Capitoline Museum.

The Charm of Judea to Christians

To the Christian no land could be so full of religious suggestions, remembrances, and associations as Judea. France, Spain, Italy, Britain were no sooner Christianized in any degree than pilgrims began to set out for the Jordan, for Bethlehem, for Jerusalem with its Gethsemane, its Calvary, and its Holy Sepulcher....