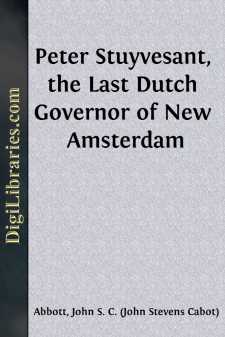 CHAPTER I. DISCOVERY OF THE HUDSON RIVER.

On the 12th of October, 1492, Christopher Columbus landed upon the shores of San Salvador, one of the West India islands, and thus revealed to astonished Europe a new world. Four years after this, in the year 1496, Sebastian Cabot discovered the continent of North America. Thirty-three years passed away of many wild adventures of European voyagers, when, in the year 1539, Ferdinand de Soto landed at Tampa Bay, in Florida, and penetrating the interior of the vast continent, discovered the Mississippi River. Twenty-six years more elapsed ere, in 1565, the first European colony was established at St. Augustine, in Florida.

In the year 1585, twenty years after the settlement of St. Augustine,Sir Walter Raleigh commenced his world-renowned colony upon theRoanoke. Twenty-two years passed when, in 1607, the London Companyestablished the Virginia Colony upon the banks of the James river.

In the year 1524, a Florentine navigator by the name of Jean de Verrazano, under commission of the French monarch, Francis I., coasting northward along the shores of the continent, entered the bay of New York. In a letter to king Francis I., dated July 8th, 1524, he thus describes the Narrows and the Bay:

"After proceeding one hundred leagues, we found a very pleasant situation among some steep hills, through which a very large river, deep at its mouth, forced its way to the sea. From the sea to the estuary of the river, any ship heavily laden might pass, with the help of the tide, which rises eight feet. But as we were riding at anchor, in a good berth, we would not venture up in our vessel without a knowledge of the mouth. Therefore we took the boat, and entering the river, we found the country, on its banks, well peopled, the inhabitants not much differing from the others, being dressed out with the feathers of birds of various colors.

"They came towards us with evident delight, raising loud shouts of admiration, and showing us where we could most securely land with our boat. We passed up this river about half a league, when we found it formed a most beautiful lake three leagues in circuit, upon which they were rowing thirty or more of their small boats, from one shore to the other, filled with multitudes who came to see us. All of a sudden, as is wont to happen to navigators, a violent contrary wind blew in from the sea, and forced us to return to our ship, greatly regretting to leave this region which seemed so commodious and delightful, and which we supposed must also contain great riches, as the hills showed many indications of minerals."

In the year 1609, a band of Dutch merchants, called the East India Company, fitted out an expedition to discover a northeast passage to the Indies....