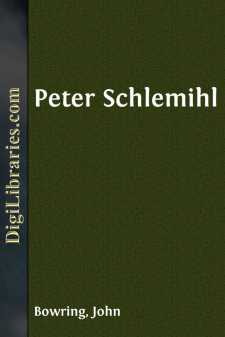 To my old Friend, Peter Schlemihl.

Well! years and years have pass’d,—and lo! thy writing   Comes to my hands again,—and, strange to say,I think of times when the world’s school, inviting   Our early friendship, new before us lay;—Now I can laugh at foolish shame—delighting   In thee, for I am old—my hair is grey,—And I will call thee friend, as then—not coldly,But proudly to the world—and claim thee boldly.

My dear, dear Friend! the cunning air hath led me   Through paths less dark and less perplexed than thine,Struggling for blue, bright dawnings, have I sped me,   But little, little glory has been mine.Yet can the Grey Man boast not that he had me   Fast by my shadow!  Nay! he must resignHis claims on me,—my shadow’s mine.  I boast it,—I had it from the first, and never lost it.

On me—though guiltless as a child—the throng   Flung all their mockery of thy naked being,—And is the likeness then so very strong?   They shouted for my shadow—which, though seeing,They swore they saw not—and, still bent on wrong,   Said they were blind; and then put forth their glee inPeals upon peals of laughter!  Well—we bearWith patience—aye, with joy—the conscience clear.

And what—what is the Shadow? may I ask ye,   Who am myself so wearyingly asked.Is it too high a problem, then, to task ye?   And shall not the malignant world be tasked?The flights of nineteen thousand days unmask ye,   They have brought wisdom—in whose trains I basked,And while I gave to shadows, being—sawBeing, as shadows, from life’s scene withdraw.

Give me thy hand, Schlemihl—take mine, my friend:   On, on,—we leave the future to the Grey Man,Careless about the world,—our hearts shall blend   In firmer, stronger union—come away, man!We shall glide fast and faster towards life’s end.   Aye! let them smile or scorn, for all they say, man,The tempests will be still’d that shake the deep,And we in part sleep our untroubled sleep.

You forget nobody, and surely you must remember one Peter Schlemihl, whom you now and then met at my house in former days; a long-shanked fellow, who had the credit of awkwardness because he was unpolished, and whose negligence gave him an air of habitual laziness.  I loved him—you cannot have forgotten, Edward, how often, in the spring-time of our youth, he was the subject of our rhymes.  Once I recollect introducing him to a poetical tea-party, where he fell asleep while I was writing, even without waiting to hear anything read.  And that brings to my mind a witty thing you said about him; you had often seen him, heaven knows where and when, in an old black kurtka, which in fact he always wore, and you declared “he would be a lucky fellow if his soul were half as immortal as his kurtka!”  So little did you value him.  I loved him, I repeat; and to this Schlemihl, whom I had not seen for many a year, we owe the following sheets.  To you, Edward, to you only, my nearest, dearest friend—my better self, from whom I can hide no secret,—to you I commit them; to you only, and of course to Fouqué, who, like yourself, is rooted in my soul—but to him as a friend alone, and not as a poet.  You can easily imagine, how unpleasant it would be to me, if the secret reposed by an honourable man, confiding in my esteem and sincerity, should be exposed in the pillory of an épopée, or in any way distorted, as if some miserable witling had engendered unnatural and impossible things.  Indeed, I must frankly own it is a very shame that a history, which another and cleverer hand might have exhibited in all its comic force, has been reduced to mere insipidity by our good man’s pen.  What would not John Paul Richter have made of it!  In a word, my dear friend, many who are yet alive may be named, but—

One word more on the way in which these leaves came into my hands.  Yesterday morning early—as soon as I was up—they were presented to me.  A strange man with a long grey beard, wearing a black, worn-out kurtka, with a botanical case suspended at his side, and slippers over his boots, on account of the damp rainy weather, inquired after me, and left these papers behind him.  He pretended he came from Berlin....