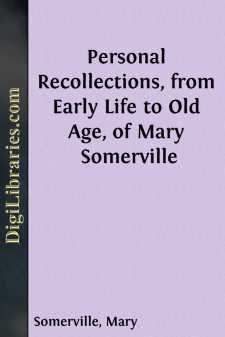 The life of a woman entirely devoted to her family duties and to scientific pursuits affords little scope for a biography. There are in it neither stirring events nor brilliant deeds to record; and as my Mother was strongly averse to gossip, and to revelations of private life or of intimate correspondence, nothing of the kind will be found in the following pages. It has been only after very great hesitation, and on the recommendation of valued friends, who think that some account of so remarkable and beautiful a character cannot fail to interest the public, that I have resolved to publish some detached Recollections of past times, noted down by my mother during the last years of her life, together with a few letters from eminent men and women, referring almost exclusively to her scientific works. A still smaller number of her own letters have been added, either as illustrating her opinions on events she witnessed, or else as affording some slight idea of her simple and loving disposition.

Few thoughtful minds will read without emotion my mother's own account of the wonderful energy and indomitable perseverance by which, in her ardent thirst for knowledge, she overcame obstacles apparently insurmountable, at a time when women were well-nigh totally debarred from education; and the almost intuitive way in which she entered upon studies of which she had scarcely heard the names, living, as she did, among persons to whom they were utterly unknown, and who disapproved of her devotion to pursuits so different from those of ordinary young girls at the end of the last century, especially in Scotland, which was far more old-fashioned and primitive than England.

Nor is her simple account of her early days without interest, when, as a lonely child, she wandered by the seashore, and on the links of Burntisland, collecting shells and flowers; or spent the clear, cold nights at her window, watching the starlit heavens, whose mysteries she was destined one day to penetrate in all their profound and sublime laws, making clear to others that knowledge which she herself had acquired, at the cost of so hard a struggle.

It was not only in her childhood and youth that my mother's studies encountered disapproval. Not till she became a widow, had she perfect freedom to pursue them. The first person—indeed the only one in her early days—who encouraged her passion for learning was her uncle by marriage, afterwards her father-in-law, the Rev. Dr. Somerville, minister of Jedburgh, a man very much in advance of his century in liberality of thought on all subjects. He was one of the first to discern her rare qualities, and valued her as she deserved; while through life she retained the most grateful affection for him, and confided to him many doubts and difficulties on subjects of the highest importance. Nothing can be more erroneous than the statement, repeated in several obituary notices of my mother, that Mr. Greig (her first husband) aided her in her mathematical and other pursuits. Nearly the contrary was the case. Mr. Greig took no interest in science or literature, and possessed in full the prejudice against learned women which was common at that time. Only on her marriage with my father, my mother at last met with one who entirely sympathised with her, and warmly entered into all her ideas, encouraging her zeal for study to the utmost, and affording her every facility for it in his power. His love and admiration for her were unbounded; he frankly and willingly acknowledged her superiority to himself, and many of our friends can bear witness to the honest pride and gratification which he always testified in the fame and honours she attained.

No one can escape sorrow, and my mother, in the course of her long life, had her full share, but she bore it with that deep feeling of trust in the great goodness of God which formed so marked a feature in her character....