Personal Narrative of Travels to the Equinoctial Regions of America, During the Year 1799-1804 - Volume 2 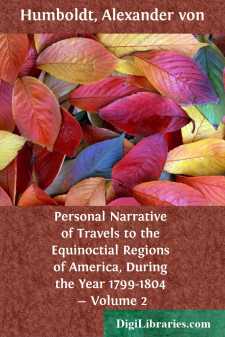 LAKE OF TACARIGUA. HOT SPRINGS OF MARIARA. TOWN OF NUEVA VALENCIA DEL REY. DESCENT TOWARDS THE COASTS OF PORTO CABELLO.

The valleys of Aragua form a narrow basin between granitic and calcareous mountains of unequal height. On the north, they are separated by the Sierra Mariara from the sea-coast; and towards the south, the chain of Guacimo and Yusma serves them as a rampart against the heated air of the steppes. Groups of hills, high enough to determine the course of the waters, close this basin on the east and west like transverse dykes. We find these hills between the Tuy and La Victoria, as well as on the road from Valencia to Nirgua, and at the mountains of Torito.* (* The lofty mountains of Los Teques, where the Tuy takes its source, may be looked upon as the eastern boundary of the valleys of Aragua. The level of the ground continues, in fact, to rise from La Victoria to the Hacienda de Tuy; but the river Tuy, turning southward in the direction of the sierras of Guairaima and Tiara has found an issue on the east; and it is more natural to consider as the limits of the basin of Aragua a line drawn through the sources of the streams flowing into the lake of Valencia. The charts and sections I have traced of the road from Caracas to Nueva Valencia, and from Porto Cabello to Villa de Cura, exhibit the whole of these geological relations.) From this extraordinary configuration of the land, the little rivers of the valleys of Aragua form a peculiar system, and direct their course towards a basin closed on all sides. These rivers do not bear their waters to the ocean; they are collected in a lake; and subject to the peculiar influence of evaporation, they lose themselves, if we may use the expression, in the atmosphere. On the existence of rivers and lakes, the fertility of the soil and the produce of cultivation in these valleys depend. The aspect of the spot, and the experience of half a century, have proved that the level of the waters is not invariable; the waste by evaporation, and the increase from the waters running into the lake, do not uninterruptedly balance each other. The lake being elevated one thousand feet above the neighbouring steppes of Calabozo, and one thousand three hundred and thirty-two feet above the level of the ocean, it has been suspected that there are subterranean communications and filtrations. The appearance of new islands, and the gradual retreat of the waters, have led to the belief that the lake may perhaps, in time, become entirely dry. An assemblage of physical circumstances so remarkable was well fitted to fix my attention on those valleys where the wild beauty of nature is embellished by agricultural industry, and the arts of rising civilization.

The lake of Valencia, called Tacarigua by the Indians, exceeds in magnitude the lake of Neufchatel in Switzerland; but its general form has more resemblance to the lake of Geneva, which is nearly at the same height above the level of the sea. As the slope of the ground in the valleys of Aragua tends towards the south and the west, that part of the basin still covered with water is the nearest to the southern chain of the mountains of Guigue, of Yusma, and of Guacimo, which stretch towards the high savannahs of Ocumare....