Personal Narrative of a Pilgrimage to Al-Madinah & Meccah - Volume 2 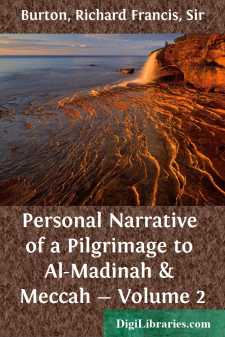 AL-MADINAH contains but few families descended from the Prophet’s Auxiliaries. I heard only of four whose genealogy is undoubted. These were,—

1. The Bayt al-Ansari, or descendants of Abu Ayyub, a most noble race whose tree ramifies through a space of fifteen hundred years. They keep the keys of the Kuba Mosque, and are Imams in the Harim, but the family is no longer wealthy or powerful.

2. The Bayt Abu Jud: they supply the Harim with Imams and Mu’ezzins.[FN#l] I was told that there are now but two surviving members of this family, a boy and a girl.

3. The Bayt al-Sha’ab, a numerous race. Some of the members travel professionally, others trade, and others are employed in the Harim.

4. The Bayt al-Karrani, who are mostly engaged in commerce.

There is also a race called Al-Nakhawilah,[FN#2] who,

[p.2]according to some, are descendants of the Ansar, whilst others derive them from Yazid, the son of Mu’awiyah: the latter opinion is improbable, as the Caliph in question was a mortal foe to Ali’s family, which is inordinately venerated by these people. As far as I could ascertain, they abuse the Shaykhayn (Abu Bakr and Omar): all my informants agreed upon this point, but none could tell me why they neglected to bedevil Osman, the third object of hatred to the Shi’ah persuasion. They are numerous and warlike, yet they are despised by the townspeople, because they openly profess heresy, and are moreover of humble degree. They have their own priests and instructors, although subject to the orthodox Kazi; marry in their own sect, are confined to low offices, such as slaughtering animals, sweeping, and gardening, and are not allowed to enter the Harim during life, or to be carried to it after death. Their corpses are taken down an outer street called the Darb al-Janazah—Road of Biers—to their own cemetery near Al-Bakia. They dress and speak Arabic, like the townspeople; but the Arabs pretend to distinguish them by a peculiar look denoting their degradation: it is doubtless the mistake of effect for cause, about all such

“Tribes of the wandering foot and weary breast.” number of reports are current about the horrid

[p.3]customs of these people, and their community of women[FN#3] with the Persian pilgrims who pass through the town. It need scarcely be said that such tales coming from the mouths of fanatic foes are not to be credited. I regret not having had an opportunity to become intimate with any of the Nakhawilah, from whom curious information might be elicited. Orthodox Moslems do not like to be questioned about such hateful subjects; when I attempted to learn something from one of my acquaintance, Shaykh Ula al-Din, of a Kurd family, settled at Al-Madinah, a man who had travelled over the East, and who spoke five languages to perfection, he coldly replied that he had never consorted with these heretics. Sayyids and Sharifs,[FN#4] the descendants of the Prophet, here abound. The Benu Hosayn of Al-Madinah have their head-quarters at Suwayrkiyah:[FN#5] the former place contains six or seven families; the latter, ninety-three or ninety-four. Anciently they were much more numerous, and such was their power, that for centuries they retained charge of the Prophet’s tomb....