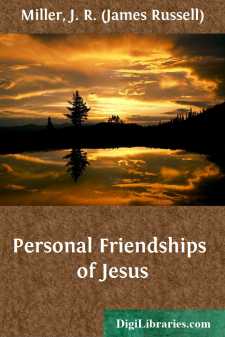 CHAPTER I. THE HUMANHEARTEDNESS OF JESUS.

O God, O kinsman loved, but not enough,    O man with eyes majestic after death,  Whose feet have toiled along our pathways rough,    Whose lips drawn human breath;

By that one likeness which is ours and thine,    By that one nature which doth hold us kin,  By that high heaven where sinless thou dost shine,    To draw us sinners in;

There is a natural tendency to think of Jesus as different from other men in the human element of his personality. Our adoration of him as our divine Lord makes it seem almost sacrilege to place his humanity in the ordinary rank with that of other men. It seems to us that life could not have meant the same to him that it means to us. It is difficult for us to conceive of him as learning in childhood as other children have to learn. We find ourselves fancying that he must always have known how to read and write and speak. We think of the experiences of his youth and young manhood as altogether unlike those of any other boy or young man in the village where he grew up. This same feeling leads us to think of his temptation as so different from what temptation is to other men as to be really no temptation at all.

So we are apt to think of all the human life of Jesus as being in some way lifted up out of the rank of ordinary experiences. We do not conceive of him as having the same struggles that we have in meeting trial, in enduring injury and wrong, in learning obedience, patience, meekness, submission, trust, and cheerfulness. We conceive of his friendships as somehow different from other men's. We feel that in some mysterious way his human life was supported and sustained by the deity that dwelt in him, and that he was exempt from all ordinary limiting conditions of humanity.

There is no doubt that with many people this feeling of reverence has been in the way of the truest understanding of Jesus, and ofttimes those who have clung most devoutly to a belief in his deity have missed much of the comfort which comes from a proper comprehension of his humanity.

Yet the story of Jesus as told in the Gospels furnishes no ground for any confusion on the subject of his human life. It represents him as subject to all ordinary human conditions excepting sin. He began life as every infant begins, in feebleness and ignorance; and there is no hint of any precocious development. He learned as every child must learn. The lessons were not gotten easily or without diligent study. He played as other boys did, and with them. The more we think of the youth of Jesus as in no marked way unlike that of those among whom he lived, the truer will our thought of him be.

Millais the great artist, when he was a young man, painted an unusual picture of Jesus....